Last week, Donald Kohn, current member of Bank of England’s Financial Policy Committee and former Vice Chairman of the Board of Governors at the FED, gave a seminar at Oxford University on a key challenge faced by policymakers today: how to make macro-prudential regulation (MaPP) work. The policy debate with the students and academics in the seminar room was placed largely, if not exclusively, in the context of the advanced industrial countries. However, emerging markets, having suffered earlier and more frequent financial crises, have had greater experiences with macro-prudential and other policies aimed at ensuring financial stability. As such, emerging markets can also offer valuable lessons.

Macro-prudential policies aim to dampen the pro-cyclicality of the financial system and to reduce cross-sectional systemic risks, partly by introducing measures to address liquidity and capital shortages, and partly by addressing issues of banks being ‘Too Big to Fail’. The global financial crisis has highlighted that using a mix of micro-prudential regulation, supervision, and market discipline to address potential risks at the level of individual financial institutions does not suffice for financial stability. Neither are traditional macroeconomic management policies (e.g. monetary policy and fiscal policy) necessarily able or the most effective in containing (the build-up) of systemic risks.

As such, macro-prudential policies are promising (for an early analytical review of the need for MaPP, see Brunnermeier, et al (2009) and Hanson, Kayshap, and Stein (2011)). Their use does require, however, a clear identification of the fundamental causes of systemic risk. Systemic risk can be cyclical—whereby financial institutions and markets over-expose themselves to risks in the upswing of the financial cycle and become overly risk averse in the downswing, rendering the entire financial system vulnerable to booms and busts. Or it can be cross sectional—whereby individual institutions’ actions and problems can have spillover effects on the rest of the financial network. While both types of risks can arise from as well give rise to externalities and market failures, appropriate policy tools can vary between the two (Allen and Carletti (2011), Bank of England (2011), and Schoenmaker and Wierts (2011) provide alternative classifications of market failures).

Table 1 categorizes the possible macro-prudential policies by the intended target and method, namely a) capital and provisioning requirements; b) quantitative restrictions on bank balance sheets; c) quantitative restrictions on borrowers, instruments or activities; d) taxation of activities, and e) other measures such as accounting changes, changes to compensation, etc. (for another classification of MaPP see Bank of England (2011), and IMF (2011)). 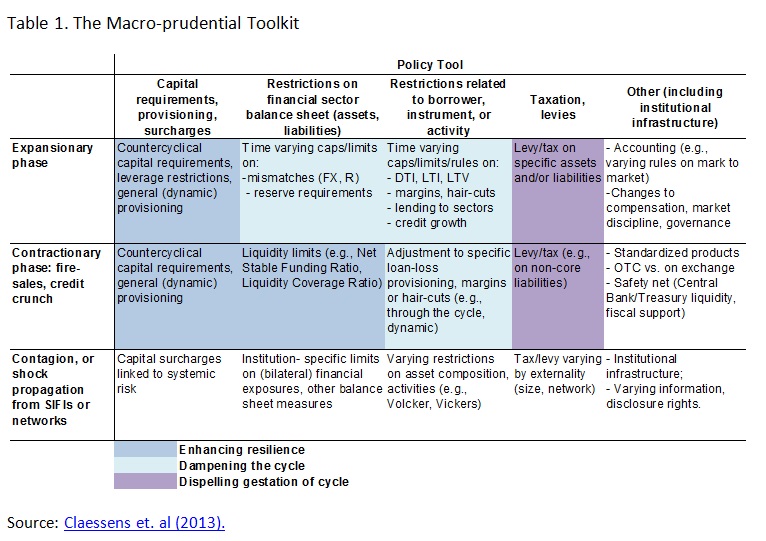 In thinking about different types of MaPP, most analysts find it useful to distinguish among measures that consist of correcting those factors that contribute to the adverse financial sector dynamics (such as the pro-cyclicality of Basel capital requirements); measures that aim to reinforce the resilience of the financial sector to such cycles—i.e., capital buffers; those that aim to dampen the amplitude of the cycles (which constitute the bulk of the measures countries have used so far); and finally those that aim to ensure the internalization of the spillovers/externalities by financial agents to dampen the build-up of the dynamics in the first place (De la Torre, 2011).

Macro-prudential Policies at the Bank of England

What about the Emerging Markets?

The policy debate is in general taking place largely in the context of the advanced industrial countries. However, emerging markets face different conditions and have key structural features that can have a bearing on the relevance and efficacy of the policy measures being discussed. Also important, emerging markets have had much greater experiences with macro-prudential policies, primarily because they have also experienced more pronounced business and financial cycles. This greater pro-cyclicality is due to their greater exposures to international capital flow volatility, commodity price shocks, and other risks, and external and internal transmission channels that operate more adversely (for more details on sources of risk in emerging markets, see Claessens and Ghosh, 2012).

This issue has been recently extensively explored in a World Bank publication entitled “Dealing with the Challenges of Macro-Financial Linkages in Emerging Markets”. The book, a comprehensive collection of articles by Hyun Shin, Viral Acharya, Stijn Claessens, Swati Ghosh, and others, discusses the challenges of dealing with macro financial linkages, and explores the policy toolkit available for dealing with systemic risks with particular reference to emerging markets.

Empirical Evidence on the Effectiveness of MaPPs in Emerging Markets

There are five things to notice in the empirical research on the effectiveness of specific macro-prudential instruments. First, substantial research on the effects of MaPP looks at tools targeting the real estate sector, and documents a positive relationship between limits on LTV or debt-to-income (DTI) ratios – particularly when they are actively managed – and house price dynamics. This link is found to be significant in both industrial and emerging market countries (Claessens et. al (2013) for a large set of EMs, Crowe et al. (2011a), and Igan and Kang (2011) for Korea). The problem with these results is that many countries either do not have time-varying LTV ratios, or they are not available at all. In the cases when they are available, some LTV ratios are not mandatory, but rather just guidelines.

Third, there is evidence that dynamic provisioning might act as a buffer, rather than as a counter-cyclical capital tool. Research suggests it can strengthen both individual banks and the banking system as a whole, even though it seems to have only a limited impact on restraining credit growth (Fernandez de Lis et. al (2012), Columba et al. (2012)).

Fourth, there is tentative evidence that other counter-cyclical buffers (such as reserve requirements, or restrictions on profit distribution) used in part for financial stability purposes may have been successful in smoothing private sector credit growth and in stabilizing capital flows (Montoro and Moreno (2011) for the case of Latin America).

Finally, although macro-prudential policies help mitigate increases in bank leverage and asset growth (dimensions of financial sector vulnerability) in the upswing, few macro prudential tools help stop declines in these bank variables in adverse times (Claessens et. al, 2013). These results suggest that macro-prudential tools are best used as ex ante tools. That is, for reducing the buildup in bank risks in boom periods, rather than for mitigating declines when the cycle turns.

The current global conjecture with global liquidity driven by lax monetary policy in advanced economies renders the topic of macro prudential policies in emerging markets even more important and pressing than usual. Learning from the experience of emerging markets and the effectiveness of tools used there can shed light on how to adapt such tools to prevent the build-up of systemic risk in advanced economies.

This entry was posted in Institutions and Growth and tagged Macro Policy Management. Bookmark the permalink.