There’s a lot of chatter in the blogosphere about Westerners’ perceptions of Africa, and how poorly they align with Africans’ own views of the challenges their societies face.

This week I’m in Oxford, for the annual conference on “Economic Development in Africa” at the Centre for the Study of African Economies (CSAE) .  The CSAE conference is unique among top-tier development econ conferences in that it brings together a huge number of scholars based in African universities and research institutes  — as well as people like me, non-Africans working on the economics of Africa.

Looking at the conference program, I thought this might be a good testing ground for this hypothesis about African and Westerners’ divergent priorities.  Do the research topics of African and non-African scholars working on economic development in Africa align?

I decided to take a closer look at the set of 264 papers presented at the conference.  Richard Payne (the CSAE’s IT director, who crafted the conference program and website) kindly shared the spreadsheet underlying the program, with a field indicating the continent-or-origin for the submitting author, and the thematic area they submitted their paper to.  Here’s what the data show: 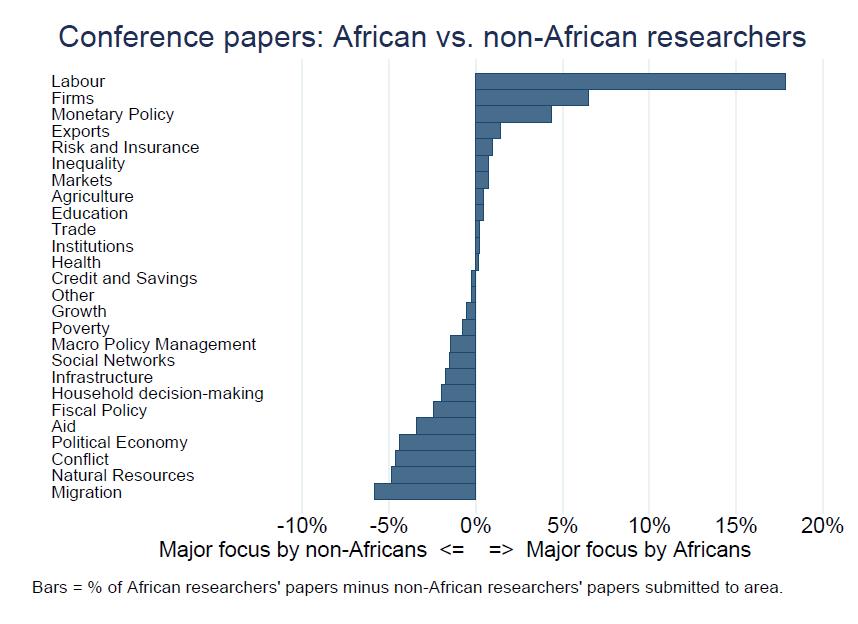 It’s a bit hard to draw firm conclusions here, given the large number of topic categories.  But if you squint a little (and group topics into broad conceptual categories), what strikes me is the following: African scholars are disproportionately interested in labour (i.e., jobs), firms (possibly jobs again), and monetary policy.  Non-African scholars are disproportionately interested in political economy, conflict, natural resources, and (an outlier) migration.  Roughly speaking, there’s a division between jobs-focused papers by African researchers and papers by non-Africans focused on institutions.

Also, it’s hard to pass up mentioning that “aid” is a much bigger priority for non-African than African researchers.

Between sessions this morning, I mentioned this pattern to another conference attendee — Bob Rijkers from the World Bank — who asked, sensibly, is this just driven by the CSAE’s own acceptance and rejection decisions?

So I went back to Richard and asked for the full (anonymized) set of paper submissions — over a thousand papers in total.  Sure enough, the pattern looks quite different: 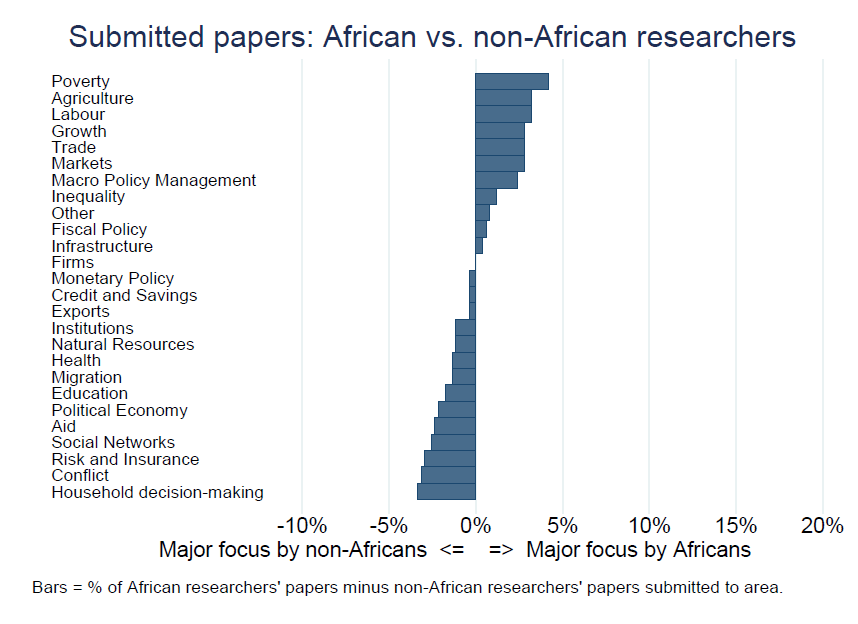 There are fewer large differences between African and non-African priorities in the full set of submissions.  Labour is still a much higher priority for African researchers, but so are poverty and agriculture.  On the other end, rather than institutions, it seems there are a lot of non-African researchers working on Africa who focus disproportionately on intra-household issues, risk, and social networks.  Interestingly, conflict remains a much more popular topic for non-African than African researchers.

I’m curious what others make of these patterns?  Scanning the categories in the graph, am I right to see systematic patterns, or does this strike people as random noise?  If the patterns are systematic, I’m also curious what the dynamic relationship looks like: comparing across years, are African papers converging to the non-African topics on the Western academic frontier, or are Western researchers listening to their African colleagues who may be closer to the policy dialogue in their respective countries?  Maybe that’s another blog post.

This entry was posted in Institutions and Growth, Jobs, Finance and Skills, News and Updates and tagged CSAE2013. Bookmark the permalink.