Posted on March 25, 2013 by Danae Kyriakopoulou 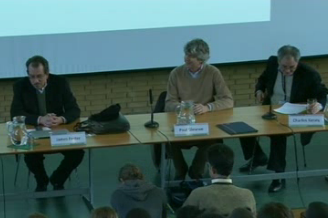 James Foster opened the discussion by highlighting the problem of high cost and low quality data availability and measurement. The credibility of claims to success or to a need for more funds depends on the quality of data and thus necessitates more cost-effective and reliable ways of surveying. As for measurement, ideally we would have an indicator that captures the multidimensionality of development whilst retaining the simplicity of a sole headline figure that makes GDP so attractive despite its crudeness.

But is this possible? Yes, according to Foster, who proposes a new instrument that focuses on the need for transparency to identify which aspects of poverty reduction are actually achieved and how they affect trends in overall poverty. In a way, this is a micro application of the “growth diagnostics” approach to achieving growth by identifying and targeting the most binding constraint, stressing that even if we have a single goal (growth/development) there are many ways to get there and which path we choose will affect the outcome. The proposed measure will both take into account dimensions of poverty such as health, education, and living standards, and register the change in numbers for each of these dimensions. Such a method will enable governments to explain to their people why overall poverty may be increasing even if some aspects of it that depend on social policy are actually improving.

Why is this important? Foster argues that psychology matters and that to move forward we need to focus on what we can achieve rather than report on the failures. Yet, as someone pointed out on Twitter during the session, it might well be that this new composite indicator “conceals rather than reveals”, and therein lies the danger of governments using this flexibility to their advantage in order to show that they’ve been doing well. Of course, the counterargument is that no flexibility will actually be offered to policy-makers in designing their preferred multi-dimensional index, but rather that the new indicator will enhance transparency and the opportunity to monitor progress across different dimensions.

Overall, the idea of this new indicator was positively received by the audience, which offered constructive suggestions for improving it. For example, Paul Collier floated the idea that focusing on living standards may not be enough and that we should expand our focus. For example, what triggered the uprisings during the Arab Spring was not the demand for food and higher living standards, but rather for justice and representation, and eventually employment prospects. African scholars indirectly agreed in that what matters is not whether goals are met, but the “quality of intervention” – the quality of leadership and the level of legitimacy accompanying it. The ends are important, but by setting goals we should not ignore the means through which they are achieved.

Some thoughts on education

It became clear in the second part of the session, headed by Paul Glewwe, that measuring progress towards achieving the second and third MDGs on education is much trickier than it first appears. For a start, measurement is tricky because of the question of whether to measure completion rather than enrolment rates, as the two do not necessarily always overlap. This is because in many countries children often have to repeat classes, leading to an inflation of measured enrolment rates when, in reality, completion rates are actually much lower. Indeed they often are, especially in the former French colonies that have stricter rules on passing each grade in order to progress onto the next. Is this a good or a bad thing? And does the intuitive judgement come across in the data? There is clearly a tradeoff, as under such a system students may actually learn more (as the system ensures that they have learnt something by the time they complete primary education), even if enrolment rates are lower.

If what we are interested in is learning, rather than education for the sake of it, then we should be measuring something else, not simply enrolment rates. Glewwe stressed that what we should be aiming for is to improve performance in standardized tests such as PISA and TIMSS, and make them more widely attended by children from developing countries. For his final point, Glewwe stressed that we need new MDGs for education which target lower secondary rather than just primary education. While the latter may push people into poverty, the former will push them out of it.

Removing the stigma from the African continent

Last, but definitely not least, Charles Kenny drew attention to the consequences of setting the bar too high and hence missing the targets. He suggested that Africa is “misjudged and abused” by the current MDGs, and that the new goals – as well as the process of setting them- need to be different.

Different, but in what way? It is crucially important that Africans contribute their own say – so far literature and action in relation to the MDGs has been dominated by scholars in the “global north”. Moreover, Kenny stressed that even though goals are important, we should be very careful to not set goals that are unrealistic and overambitious for a continent that starts so far behind (given the lost decade of the 1990s and incredibly-low median income levels) as this contributes to branding Africa as a basket-case and labelling it as a “failure of the MDGs”. This has a twofold effect: firstly, it discourages trade and investment and secondly it encourages aid-sceptic taxpayers and strengthens their opposition to channelling funds towards African development. Both of these are important as it becomes clear that Africa cannot develop alone and assistance and investment from the international community plays a crucial role.

Einstein once said that if he had an hour to solve a problem and his life depended on the solution, he would spend the first 55 minutes defining the problem. Once he knew the proper question, he could solve the problem in less than five minutes. Setting and achieving the new MDGs is a response to the the life-threatening lack of development faced by many people living in developing countries. This plenary session contributed to shifting focus onto the right questions and the prolific research presented in the conference in general covered vast aspects of development, from trade and aid policies to macroeconomic policies, to health, education, and job opportunities. Whether the second step -the solution- will follow through as efficiently and successfully as predicted in Einstein’s thought experiment remains to be seen. Not one, but many lives depend on it.

You can watch the entire plenary here.

This entry was posted in News and Updates, Policies to Protect the Poor and tagged CSAE2013, MDGs. Bookmark the permalink.