The National Rural Employment Guarantee Act (NREGA) is one of the world’s biggest anti-poverty public workfare programmes, provisioning for 100 days of guaranteed employment in a year to every rural household in India. The idea behind this programme has been to generate employment opportunities for the rural unskilled workers who remain unemployed or under-employed due to seasonality of agriculture and for the creation of rural assets. Ultimately, this programme intends to smooth consumption and eventually reduce the level of poverty. 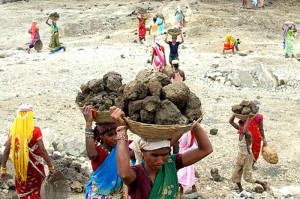 In his CSAE seminar of the 4th February, 2014, Clément Imbert presented a joint paper with John Papp which studies the effect of the NREGA on short-term migration. He further examined the connectedness between work availability and the likeliness of migrants to work for NREGA, and examined the importance of seasonality in these decisions.

The possible links between the NREGA programme and short-term migration is explained by a simple model which identifies the individuals who are likely to reduce their time spent working outside the village as a result of the NREGA programme. It splits time endowment between work within and outside of the village. It predicts that a migrant leaves his village for work if the net return from working outside is greater than the earnings one get from spending entire time within the village. Following the introduction of government work at fixed minimum wage, migrants will spend more time in village and work for government programme provided daily wage offered is greater than net earnings per day from outside work. And people will stop migrating if the wage offered under NREGA is more than marginal earnings per day outside work and if the total earnings from in-village work including NREGA is more than net earnings from in-village work in the absence of NREGA and outside work together.

In order to test their model, Clément Imbert and John Papp use survey data from a reportedly high out-migration area sampled 705 households living in 70 villages at the border of three major states of India- Rajasthan, Madhya Pradesh and Gujarat. The participants in the age-group 14-69 years have reported to migrate 28 percentage points more against average 3 per cent for rural India. To capture the seasonality effect of NREGA on short-term migration and participants’ likeliness to work for NREGA, individuals were interviewed for one complete agriculture year.

The descriptive statistics show that the NREGA work is concentrated during lean season of summer. And a quite significant proportion of adults – as high as 80 per cent – expressed desire to work more for NREGA. Among those who do not want to work for NREGA, 67 per cent are engaged in other works inside the village, specifically during Monsoon season which is the main time for agriculture activity.

Migrants mostly do jobs of short-term nature and work for multiple employers at different wages. Introduction of government employment via NREGA succeeded in reducing the migration for 20 per cent of adults. Further, during summer 2009, 88 per cent of the migrants reported that they would have worked more for NREGA had it been available.

The regression estimates reveal that education and salaried adults are less likely to want work for NREGA. Further, migrants are 15 percentage points more likely to report willingness to work for the programme. Importantly, working for the NREGA is negatively correlated with time spent outside the village: one day increase in NREGA work corresponds to a fall of around 0.20 days outside village time spent.

The creation of employment under this programme varies across the country with some parts doing well against others. Using cross-state differences in implementation of NREGA across States’ borders, they perform an IV analysis to better identify the impact of NREGA on temporary migration. In their first stage regression, they find that adults in Rajasthan worked almost 9 additional days for NREGA compared to MP and Gujarat. Their second stage regression confirms the important impact of the NREGA programme on days spent outside village work: one day of additional NREGA work reduces migration approximately by 0.75 days. Moreover, this difference is noticeable for summer season during which most of the government work is provided, indicating the importance of seasonality in the decision to migrate temporary for work. However noting the other differences among adults living across these states, the differences in migration could be to a great extent due to these pre-existing differences and unrelated to NREGA.

In conclusion, government work seems an attractive alternative to migrants to date despite the wage offered under NREGA is as low as half of the wage received per day of work outside the village suggests that the migration costs is high. The study shows a significant impact of off-season work on private employment through its impact on short-term migration. Consequently, notwithstanding the welfare gains, the net income effect of the programme is much less than the wage offered by the programme.

Deepak Kumar is a visiting research student at the Department of Economics, University of Oxford from India on Commonwealth Scholarship. He is doing his PhD in economics from Jawaharlal Nehru University, New Delhi.

This entry was posted in Uncategorized. Bookmark the permalink.