Are remittances shared after an aggregate shock? The impact of mobile money services on risk sharing.

The introduction of mobile money services allow new and previously difficult to maintain risk sharing networks to form, for example between a migrant in the city and the family back home in a village. When risk sharing was confined to the village, households could only share risk against shocks which were uncorrelated across households, for example illness or loss of employment. They couldn’t insure against aggregate shocks affecting the entire village at once, for example droughts or floods.

Mobile money services make it possible for households to smooth consumption after aggregate shocks, by sharing risk with someone in a location far enough away that it’s not affected by the same shock at the same time. However, these new risk sharing relationships can undermine traditional village based risk sharing networks, to the potential detriment of non-mobile-money users.

To answer these questions, I use three waves of panel date from the Tanzania National panel survey in a difference-in-difference specification. I define an aggregate shock both as a self-reported drought or flood and as a 1 standard deviation absolute deviation from mean rainfall.

Since I am using observational data for my analysis, there are two potential self-selection effects which could bias my results. The first of these is selection into mobile money use by the household, if selection depended on a variable that was time varying and unobservable. I control for this effect by:

A second source of potential bias is agent selection into villages. A mobile money agent is required to withdraw and add money to your mobile money account and it is possible agents select into the most profitable villages where consumption smoothing is also easier. I control for this by:

These results are illustrated in the following figure: 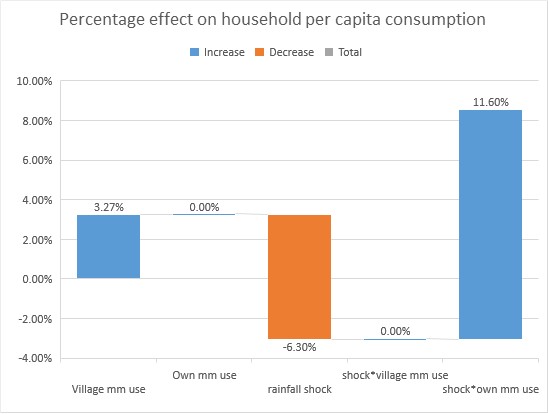 These results raise the question of why the consumption of non-mobile-money-users in villages with other mobile-money-users is not smoothed after an aggregate shock, especially considering mobile money users appear to experience a gain in their consumption after the shock. This is an interesting area of future research, with potential alternative explanations being lack of norms related to sharing after an aggregate shock and changing risk sharing relationships. It would also be interesting to examine why certain households take-up mobile money services and others don’t. Is there a subsection of people who are unable to benefit from these services and how can we help overcome any barriers to their use? Examining this in more detail would give insight into who benefits from new financial services.

This entry was posted in Uncategorized and tagged mobile money, Risk and insurance, Social Networks, technology. Bookmark the permalink.