I used to open these emails with asides about the cricket and weather (quiet, and terrible today), but recently it just seems to be obituaries and rants. 2016’s Final Destination-like run through my favourite musicians has apparently extended into 2017. There was a point (and not too long ago) when I owned virtually every song Chris Cornell appeared on, from the mega-hits to the relatively obscure. Of the 25 most listened-to songs on my iPod, two are from his side projects – both among my favourite songs. Here’s a lovely tribute on NPR. Depression sucks.

1.       I want to cheer up immediately, so I’m going to mock some research now. In a candidate for the Stating the Bleeding Obvious Hall of Fame, researchers have spent actual money surveying students to ask them if they like prefer ‘agreeable, open and reliable’ lecturers to those who are ‘disagreeable, closed-off and unreliable’. Incredibly, they’ve discovered that students express a preference for professors whom they can talk to, who aren’t assholes and who don’t randomly miss lectures and fail to mark work. Bravo guys. I look forward to the follow up study, in which they ask people if they would prefer to be kicked hard in the nether regions or given a cash grant.

2.       I love Excel so much I want to make a version of Jerry Maguire in which the Renee Zellweger character tearfully tells a spreadsheet (played by Bryan Cranston) “You had me at =COLLAR($B$12,C3/D3,$B$13)”. So when I discovered that Planet Money did a show about the creation and use of Excel (transcript), I did a small dance of joy and read it gleefully. Spreadsheets used to be done by hand. Imagine that! Their invention has completely revolutionised our ability to ask speculative questions of data – not always a good thing, mind. Apparently, there is an annual Excel Geek-Off in which the best Excel programmers in the world compete to build models. DFID should send Nick Lea and frame the golden keyboard he inevitably wins.

3.       This is one of the best things I’ve read all week – a VoxEU summary of superb research that takes the insight Nick Bloom had in Firming Up Inequality, that most inequality growth has been between firms, and not within them (i.e. inequality has grown more based on who you work for than on your position in the hierarchy) and investigates how this relates to productivity, and which firms are driving the effect. It’s superb all the way through and has substantial policy implications. Related, and also from VoxEU, Branko Milanovic on how we should tackle inequality if Picketty is right and it’s primarily because returns to capital are greater than returns to labour.

4.       Another superb Lant Pritchett piece, this time about how China used just the right mix of prescription and freedom for its bureaucrats and officials to empower them to find ways of achieving rapid growth – and with it poverty reduction.

5.       A couple of weeks ago I made an attempt at explaining William Baumol’s cost disease theory. Dietrich Vollrath does the same here, much better than I did. The key point he makes is this: “Baumol’s cost disease is a result of incredible affluence.” If you’re lucky enough to have an engine of growth that pushes up the pay for the thing that most other people do, count your blessings. This is exactly what is missing in most poor countries, but I don’t think anyone would rather live in Somalia than the US just because a haircut might be cheaper.

6.       Messing with markets leads to odd arbitrage opportunities and weird outcomes, like a petrochemicals company buying a talking cat app for about a billion dollars. I feel like that sentence would fail the Turing test, and yet I really am human (I think).

7.       Lastly, I do think the Warriors are going to win, because four of the 15 best players in the world are on their team, but never count out LeBron. The man is a human cheat code. 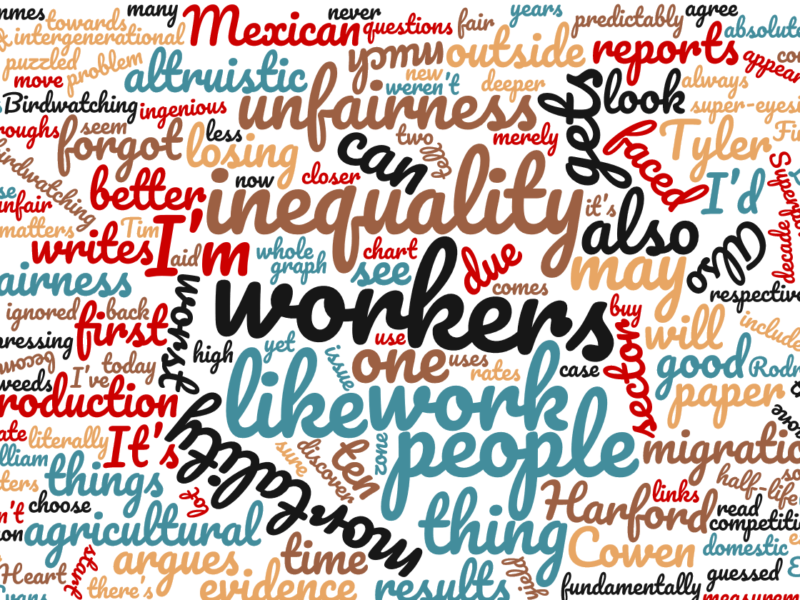