These links start with deaths a disturbing amount these days. I must be getting old. I had thought Simspons characters don’t die, but apparently it’s quite common. Still, Stephen Hawking probably had a bigger impact on the world than Bleeding Gums Murphy, befitting a man who apparently said ‘my goal is simple: a complete understanding of the universe, what it is and why it is at all’. Imagine being a supervisor reading that in a research proposal. I’m not going to pretend to have read A Brief History of Time, though like everyone else I’ve written the odd note ripping off its iconic title. You can get flavour of his gift for communicating complex ideas simply in this excerpt, though. 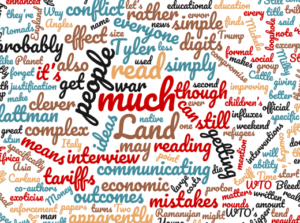