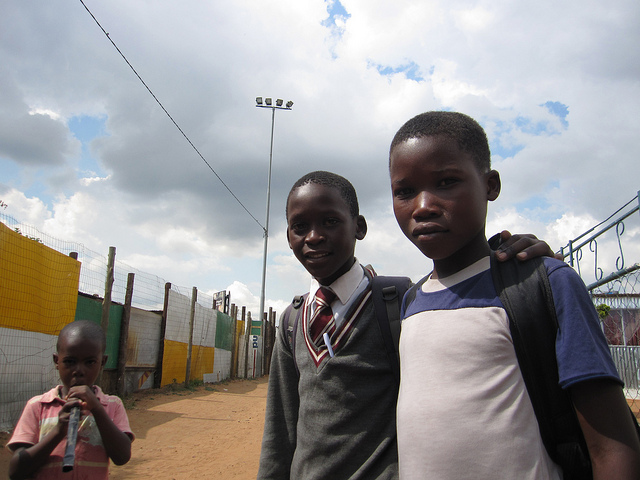 Designing effective schooling policies requires understanding what motivates school enrolment decisions. This partly explains why so many empirical studies have attempted to measure the wage benefits that individuals receive from an additional year of schooling (or the rate of return on schooling investment). Until quite recently, most such studies found that the returns to schooling decreased as students advanced to higher schooling years: the schooling-earnings profile was concave. More recent studies suggest that the shape of this earnings profile has changed from concave to convex: the returns to schooling are now relatively low for early schooling years and only start to increase at higher schooling years. This convex shape is particularly pronounced in African labour markets.

Theoretical models of human capital investment have been slow to adapt to this new evidence. Most such models maintain the assumption that the earnings profile is concave, and also that schooling enrolment decisions are made by individuals who have perfect foresight about future wage offers and schooling costs (either monetary or psychological). Under these assumptions, the only benefit of an additional year of schooling is the wage increase associated with the current school year. However, such models find it difficult to explain why most individuals in African countries choose to complete early, low-yielding schooling years, but then decide to drop out before completing the more advanced, higher-yielding years.

If the earnings profile is actually convex then this endows lower schooling years with a second benefit: the option of continuing on to more advanced schooling years. Furthermore, acknowledging that schooling decisions are made with imperfect foresight about future wage offers and schooling costs means that there is also a second option value to schooling: even if a student anticipates dropping out of school after the current year, staying in school will allow them to proceed to the next year of schooling if it turns out that either outside wage offers or schooling costs turn out to be lower than expected the next year. The fact that these two option values make earlier school years more beneficial can potentially go some way in explaining the pattern of enrolment decisions we observe.

Recent theoretical models have relaxed the concavity and perfect foresight assumptions and speculate that these option values may be important determinants of enrolment decisions. In our recent CSAE working paper, Francis Teal and I1 go one step further and develop a decomposition technique2 that calculates the relative importance of different benefits of completing additional schooling years, including both types of option value. These components are then estimated on a sample of workers with a highly convex schooling-earnings profile, and who face considerable uncertainty regarding future wage offers: young, black South African men.

Plotting these three benefits across the different schooling levels gives us the graph below. The line indicates the height of the stacked components, which represents the total discounted expected value of investing in a particular schooling year (expressed in terms of current period log earnings). The higher the net expected value of a specific schooling year, the more likely potential learners will be to enrol in this year of schooling. 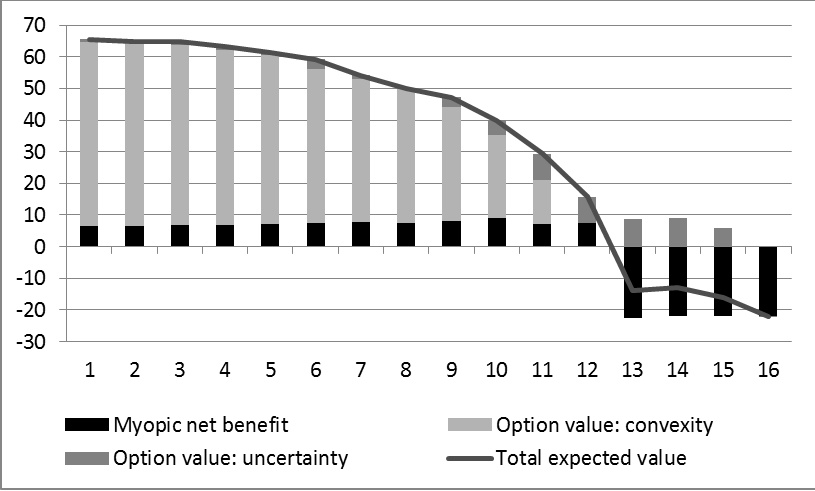 In our model, the immediate (or myopic) benefit of additional schooling is initially low, but then gradually increases with additional years of primary and secondary schooling. This expected benefit turns negative after years 12 of education, at which point the relatively high wage and employment benefits are more than offset by the large estimated costs of tertiary education. The relatively small myopic net benefit of completing early schooling years is dominated by the larger positive option value associated with the convexity of the earnings profile.

By far the most important reason why young black South African men choose to complete primary and early secondary school, despite the relatively low returns associated with these investments, is the promise of higher returns further up the schooling ladder. The option value attached to uncertainty regarding future wage offers and schooling costs is quite small at low schooling levels, as most are quite certain that they will enrol in school again after the current schooling year. However, as learners approach completed secondary school and the margin between expected costs and benefits starts to shrink, the uncertainty option value increases along with the uncertainty about next year’s enrolment decision. Individuals now attach more value to the opportunity to observe next period’s school cost and wage offers before deciding whether or not to leave the school system.

Most young, black South African men choose to complete primary and early secondary schooling years despite the relatively low returns associated with these investments. Our results show that rationalising these decisions requires large option values of early schooling levels (which are mainly associated with convexity rather than uncertainty), as well as a schooling cost function that increases steeply between schooling phases.

[1]Rulof Burger is a Senior Lecturer at the Economics Department, University of Stellenbosch. Francis Teal is a Research Associate, CSAE.

[2] The technical details of this technique can be found in the full paper.

This entry was posted in Jobs, Finance and Skills and tagged Education, Labour. Bookmark the permalink.