Well, I don’t know about you, but I’m still on a high after Martin Wolf’s talk at DFID yesterday. As Nick said, how do we top that – exhume Keynes? It’s only slightly dampened by the fact that just two weeks after I celebrated his longevity Misbah ul-Huq, 103, has finally retired. Worse, his old mucker Younis Khan has gone with him – one of the greatest  batsmen of all time, and almost indisputably the most underrated. So, on to the links (and by the way, if you work for DFID and want to know more about trade, Huw Lewis has started to put together a similar collection of bits and pieces on the topic every week – e-mail him for inclusion).

1.       Most of the people reading this will already know that asking if aid ‘works’ is basically an incoherent question. Works for what? For whom? Yet it doesn’t stop critics blasting out huge headlines, bereft of fact, logic or humanity. Steven Radelet got a little sick of these headlines and decided to write a superb, balanced piece in Bloomberg. He shows that, if by ‘work’ you mean ‘helps extremely poor people have better lives’, the answer is yes, aid works. But he’s modest in his claims: it doesn’t achieve everything (what does?) and it’s not possible have a perfect record with everything we try (who does?).

2.       Planet Money totally outdo themselves with this fantastic show on India’s demonetisation (transcript) – when Modi basically woke up one morning and said “Morning everyone! All your cash is useless. Enjoy the queues at the bank.” and then dropped the mic. It’s fascinating and moving. It covers the genesis of the policy – a crazy, surprising story; and gives a glimpse of the human cost it imposed.

3.       I get the feeling that Lant gets to use the CGD blog differently to everyone else: every once in a while, he pops up with a bit of a rant with a great title. Being able to read Lant’s rants are one of my favourite things about being literate, so I’m glad they let him do it. He writes here about the problems of doing development research that focuses on specific interventions (for example, paying teachers more), rather than starting from the point of developing a plausible and powerful theory about the thing you want to effect (for example, literacy). It reads as a backhand to the RCT movement, but to me it’s most powerful as a (much-needed) reminder that a good theory matters enormously.

4.       Tyler Cowen interviews Garry Kasparov. It is full of fantastic exchanges. Kasparov has had a much more direct interaction with a robot that was out for his job than anyone else, and he is correspondingly thoughtful about the impact of machines on human labour. His optimistic vision is wonderful: “More intelligent machines … will take over more menial aspects of cognition and will elevate our lives towards curiosity, creativity, beauty, joy…”. Also, Kasparov wrote a book with the most Russian title in history. It’s called Winter is Coming and makes Crime and Punishment sound like one of the Mr. Men series.

5.       Doug Gollin came to DFID a few years ago and presented research about ‘consumption cities’ as opposed to ‘production cities’. I know people who don’t fully buy this distinction (I’m a fan), but it’s now showing up in the media. This very interesting piece on Kinshasa makes basically the same argument. Very much related – The Economist on the barriers Africa will have to overcome in order to industrialise effectively. Investment (in the broadest sense – including investing in systems and people) is at the root of all of it.

6.       I’m not sure I can summarise this, but I encourage people interested in gender and economic development to read it: a status-check of how India’s economic growth patterns have translated (or not) into improvements in gender equality. It’s full of interesting description, though I think it’s lacking in a good set of theories to explain its findings.

7.       Lastly, because there hasn’t been enough frivolity this week – a Chinese music video about reducing the costs of trade, sung by children. And yes, it’s every bit as crazy as it sounds. 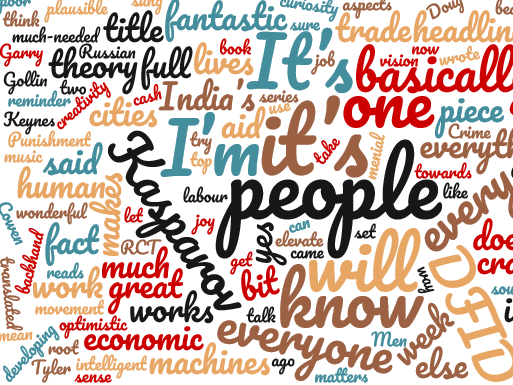 One Response to Links round-up