From rebellion to electoral violence

Promoting democratisation and elections has been at the core of peace-building missions in post-conflict societies since the end of the Cold War. Recent examples are Afghanistan, the Democratic Republic of Congo, Iraq and Libya, just to name a few. Democratisation has been considered as a key factor for supporting the governments’ accountability and legitimacy, which ultimately fosters social trust and make violence relapse less likely. Nonetheless, elections failed to be implemented properly in a vast majority of post-conflict countries in Africa. A recent study by Bishop and Hoeffler (2014) reveals that during the 1975-2011 period, 80% of African polls were spoiled by violence, bribery, intimidation or inequitable government interference (Figure 1).

Understanding the causes of electoral misconducts is all the more important to prevent its adverse economic consequences, the destruction of social capital, a weakening of the State’s capacity and its devastating effects on the living conditions of civilians.

In a new working paper, Olivia D’Aoust, Olivier Sterck and Andrea Colombo discuss the origins of the electoral violence that spoiled the 2010 elections in Burundi. Burundi is a small landlocked country located in the Great Lakes region in sub-Saharan Africa and it is ranked 178th out of 187 countries according to the Human Development Index. Its GDP per capita was USD 267 in 2013 (The World Bank).

The history of Burundi has been characterised by deeply anchored cleavages between its two major ethnic groups, the Hutu and the Tutsi. Ethnic rivalries constituted the ground for tensions and ethnic massacres that culminated in the 1993 civil war between the Tutsi-led army and Hutu rebel groups. After the Arusha peace agreement was signed in 2000, two rebels groups remained active on the ground: the CNDD-FDD and the Palipehutu-FNL. In 2004, the CNDD-FDD laid down its weapons. One year later, its leader, Pierre Nkurunziza, won the elections. Burundi then became the battleground for the two rival Hutu rebel groups. During four years, the new Hutu government fought against the Palipehutu-FNL, which finally demobilised in 2009, putting an official end to the civil war. The first post-civil war elections were organised a few months later in May 2010.

The pre-electoral climate was spoiled by numerous violent episodes, claims of intimidation and suspicions of fraud. The aim of our study is to understand whether the ex-combatants played a role in triggering electoral violence. We also assess whether electoral violence had any socio-economic, ethnic or political grounds.

We show that episodes of electoral violence in 2010 were channelled through enmities between Hutu rebels, eventually bursting during the electoral competition. The local distribution of Hutu demobilised soldiers, based on their affiliation during the civil war, was indeed a prominent determinant of violence: the more a municipality was polarised (through the presence of two opposing groups of ex-combatants), the more likely electoral violence occurred. Figure 2 displays the number of events predicted by the distribution of ex-soldiers as a function of the number of groups of similar size in each municipality. It predicts a five-fold increase in electoral violence between the lowest- and highest-polarised municipalities. 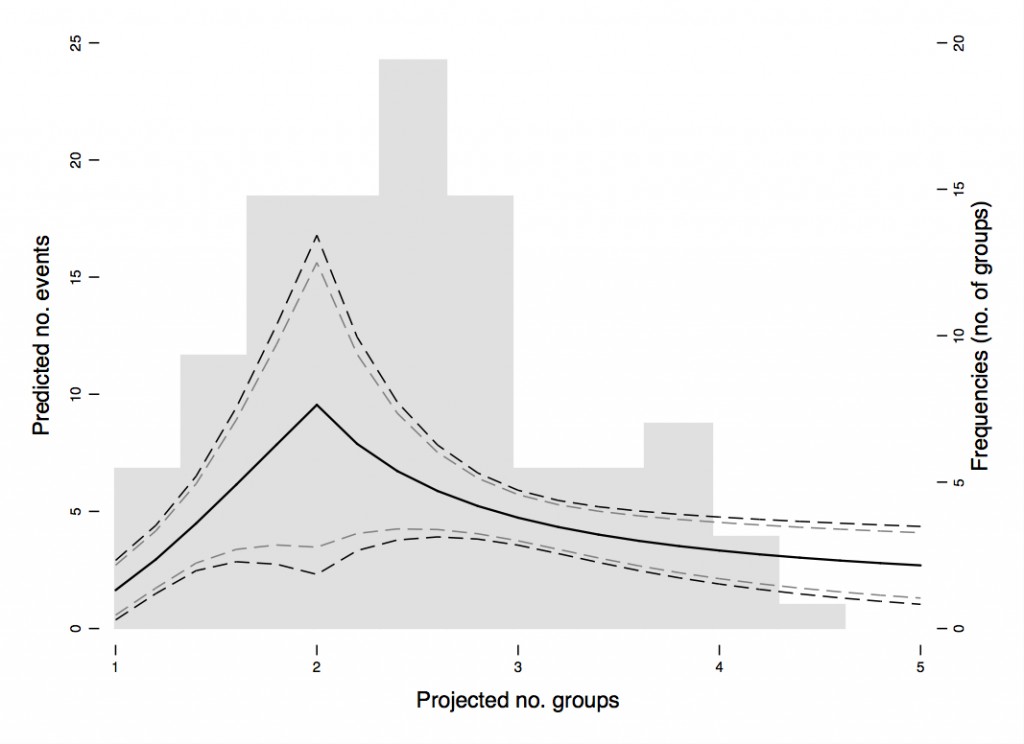 We also show that municipalities that had been heavily exposed during the 1993-2009 civil war were more prone to violence in 2010. On the contrary, the Hutu-Tutsi rivalry was not a good predictor of electoral malpractices. As a matter of fact, the demobilised soldiers’ polarisation effect was stronger in municipalities where the Hutu were the majority. Political competition did not matter either when tensions between ex-rebel groups were accounted for. The key for tackling electoral malpractices in Burundi may then reside in the role played by demobilised soldiers within the political arena during the campaigning process.

Policy-wise, our research urges for a democratisation process to be tailor-made on the basis of a country’s specific political and historical contexts. Elections, even if combined with demobilisation programmes, are not sufficient for establishing sustainable peace in post-conflict societies like Burundi. Policies facilitating the transition from rebellion to political competition, within a sounder institutional framework, should be enhanced.

Burundi’s 2015 elections are fast approaching and the incumbent president does not seem to be willing to conform to the constitutional requirement of ceding the term of office (BBC news). Burundi’s internal stability will thus be challenged, once again.

One Response to From rebellion to electoral violence