Before the advent of anti-retroviral therapies in the nineties, being infected by the HIV virus was equivalent to a death sentence. Now, thanks to remarkable advances in medical research, people who are HIV+ have the possibility to considerably increase their life expectancy and live relatively normal lives as long as they take anti-retroviral drugs properly. In sub-Saharan African countries, the yearly cost of generic antiretroviral drugs is less than USD150 for one person receiving treatment[1]. While this cost seems low compared to world GDP per capita (about USD 11,000), it may prove unaffordable in poor countries characterized by a generalized epidemics. From a dramatic medical issue, HIV is turning into a large and growing threat to fiscal stability in high-prevalence and poor countries. This blog post, written as part of ReThinkHIV, explores the implications for Africa[2].

Our argument starts from the proposition that if an individual can be saved from direct deadly threat with certainty at the cost of a few hundred dollars, there is a reasonable presumption that somewhere, globally, there resides a moral duty to rescue this individual. At a cost of less than USD150 per year for generic drugs and about the same amount for laboratory and health care costs, it would (only) require USD11 billion to provide free drugs to the 37 million individuals infected with HIV. To put these numbers in perspective, this represents 0.015% of world GDP; 1.6% of the military budget of the U.S.; 46% of U.S. federal funding for fighting HIV/AIDS domestically; and 3.4% of what OECD countries committed to give as international aid at the 2005 G-8 Summit in Gleneagles. This cost is further reduced by 23% if treatment is only provided below a CD4 count of 500 cells/mm3, and reduced by 57% if treatment is only provided below a 350 cells/mm3. Provided with these numbers, most people would agree that there exists somewhere a moral duty to provide free ART to HIV+ individuals who cannot afford to pay for their treatment.

HIV is a long-term infection causing the progressive failure of the immune system for which no definitive cure exists yet. Even if antiretroviral drugs are taken properly, the HIV virus will not fully disappear from the infected blood, and the viral load is expected to rebound if treatment is stopped. ART needs to be sustained in the long run, and is therefore more similar to the treatment of a long-term chronic disease than to a one-off treatment of a fatal disease. This difference has important economic implications in the long run. Offering life-long antiretroviral treatment to HIV+ people needing treatment generates a long-term financial liability which is analogous to the liability of sovereign debt.

Figure 1 compares the total cost of providing ART therapies to all those who need it with the external debt stock of countries. The blue bars represent the external debt stock of countries as a proportion of their GDP. The red bars are estimates of the discounted cost of full ART coverage in the long run for high-prevalence countries as a fraction of their current GDP. Each red bar represents the amount that a national government should save now in order to pay ART for their citizens in the long run. Figure 1 clearly shows that the moral duty of rescue constitutes a significant addition to the sovereign liabilities of high-prevalence countries. The fiscal impact seems particularly dramatic for countries like Malawi, Lesotho and Zimbabwe. A rule-of-thumb of the IMF proposes that the debt of developing countries should not breach 40% of their GDP. The analysis of Figure 1 shows that the moral duty to rescue imposes a financial liability which may be considerably higher than this threshold, thereby justifying the intervention of the international community.

As shown in Figure 2 for the case of Malawi, the yearly cost of providing ART to all those who need it is expected to rise in the short to medium term as (1) more people get infected; (2) more HIV+ individuals need treatment; and (3) more HIV+ individuals need costly second-line therapies. These estimates are a lower bound for what government will have to pay: the ageing HIV+ population on treatment faces an increased risk for many non-communicable diseases (NCDs) compared to an age-matched uninfected population, including cardiovascular disease, non-AIDS malignancies, liver and kidney disease, and osteoporosis. 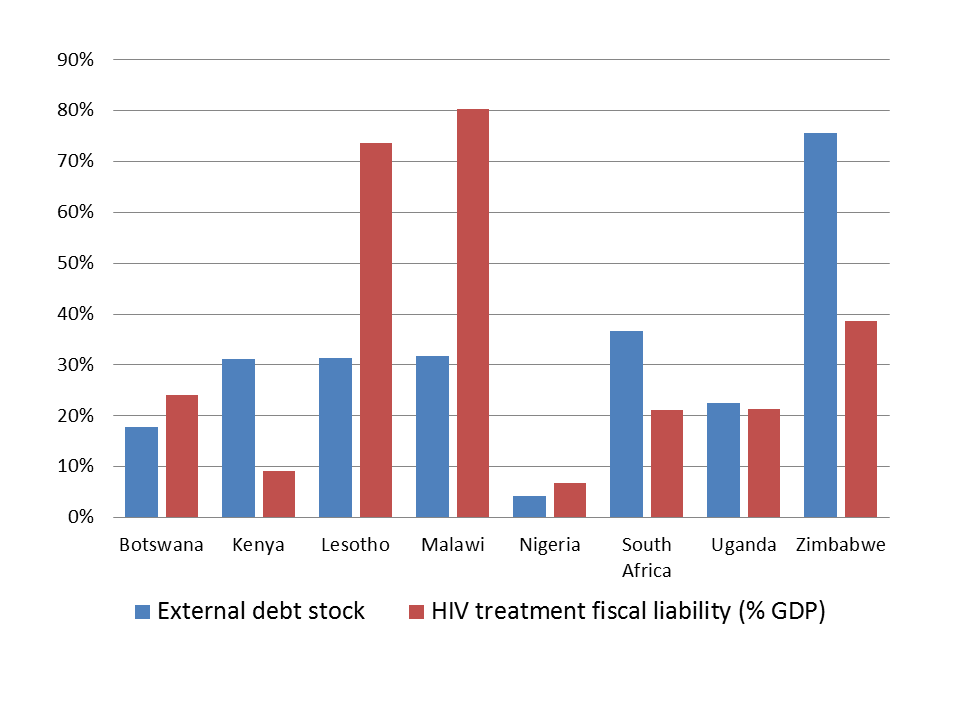 The crucial role of prevention

Once these future obligations are recognized, it is sensible for governments to minimize them. In this context, prevention can be understood as an investment to reduce quasi-liabilities resulting from the moral duty to rescue. In particular, interventions that prevent a person becoming HIV positive are worth paying as long as their cost is less than the cost of the obligation. Money should be devoted to prevention up to the point at which the marginal dollar spent on prevention reduces the cost of the moral duty to rescue, as measured by the discounted cost of treatment, by one dollar.

While this theoretical rule provides a simple way of determining the optimal level of investment in prevention, estimating the two sides of this equation in practice is likely to be an empirical challenge given the complexity of data required. Context-specific data on the epidemiology of HIV and on the marginal cost of treatment and prevention are much needed to refine this analysis and be able to orient policy. 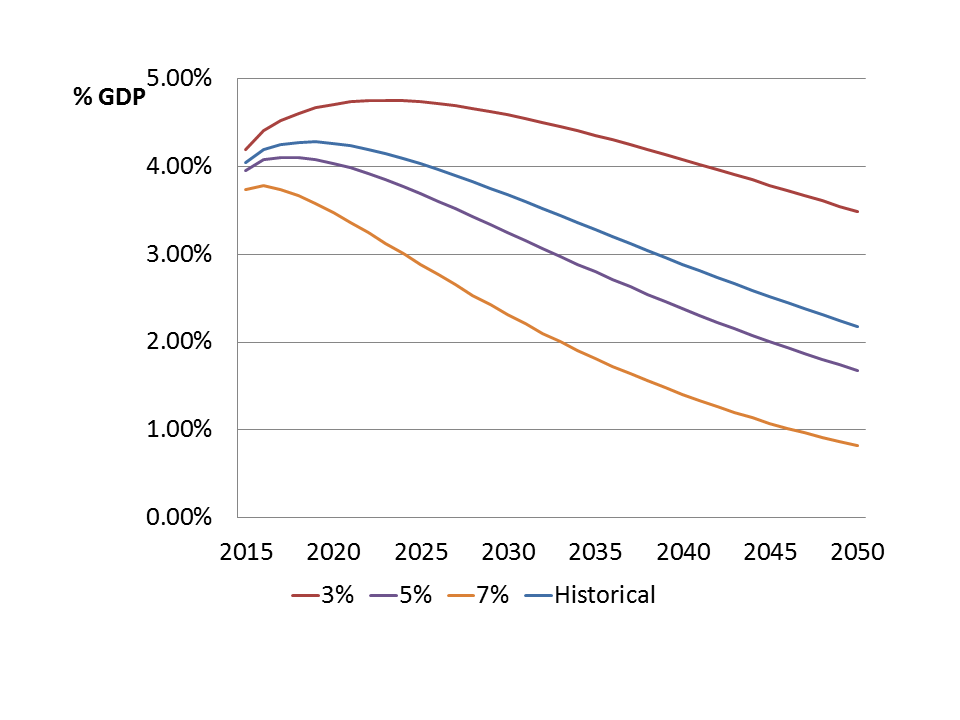 Figure 2: Long-run evolution of the cost of ART provision as a % of GDP in Malawi, for different GDP growth scenarios.

Even with optimal investment in prevention, the financial liability is likely to be unaffordable for poor and high-prevalence countries. This is a clear case for the international community to take over part of the quasi-liability, as indeed it has done in the past.

Exactly how the burden should be shared between the country and the international community is a normative issue beyond the scope of economics. However, there are some parameters that can assist in reaching a defensible position.The Arusha Target for health investment in Africa can be seen as providing a basis for determining how much countries should pay domestically for health care. The burden of HIV in the total burden of diseases then provides the amount that countries could reasonably allocate to their HIV epidemics. The debt relief provided to poor countries during Jubilee 2000 provides another basis for determining whether the quasi-debt burden of HIV is too large to bear. Econometrics can also be used to unveil past preferences of donors and thereby determines how the financial burden should be shared.

Once a sharing rule has been determined between the international community and recipient countries, appropriate incentives should be put in place in order to foster adequate investment in prevention. Two important principles should guide how financing responsibilities for past infections, future infections and prevention are shared. The first principle states that the international community should finance the cost of past infections to minimize the value of its own contribution. Indeed, because the discout rate of recipient countries is expected to be higher that the discount rate of donors, financial support for HIV for past infections will be perceived as more valuable by recipients than financial support for prevention and treatment of future infections.

The second principles states that if one party accepts to finance a share σ of the liability created by the treatment of future infection, it should also support at least a share σ of prevention efforts. Only this rule can avoid moral hazard and provides adequate incentives to invest in prevention.

This blog post is a summary of the CSAE working paper 2015-05, Paul Collier, Olivier Sterck, Richard Manning (2015). “The Moral and Fiscal Implications of Anti-Retroviral Therapies for HIV in Africa“.

This paper was written as part of RethinkHIV. RethinkHIV is a consortium of senior researchers, funded by the RUSH Foundation, who evaluate new evidence related to the costs, benefits, effects, fiscal implications and developmental impacts of HIV interventions in sub-Saharan Africa. Other members of the consortium have made valuable contributions and suggestions on the paper, and we specifically acknowledge Rifat Atun, Angela Chang, Tim Hallett, Judith Kabajulizi, Mthuli Ncube, Osondu Ogbuoji, Michelle Remme, Sachin Silva, Mariana Siapka, Mikaela Smit, Anna Vassall, Charlotte Watts and Alan Whiteside. We also thank David Miller and Markus Haacker for useful comments and discussions.

This entry was posted in Policies to Protect the Poor and tagged Aid, Development, Health, HIV/AIDS, Macro Policy Management. Bookmark the permalink.