Natural Resources and Conflict in Africa: Isolating Facts from Fiction

Posted on November 24, 2015 by Sambit Bhattacharyya

The Causality Question
Evolutionary biologists have long argued that competition over scarce natural resources is one of the key drivers of violent conflict within and across species. The competition in Africa appears to be over the revenue generated from scarce natural resources which often leads to violent conflict. Chilling examples of conflict in Angola, Democratic Republic of Congo, Rwanda, Sudan and other resource rich regions of Africa often tempts scholars into arguing that resources cause conflict. Figure 1 somewhat visualises this narrative whereby a rebel in Angola is seen to be guarding a diamond mine. Yet establishing causality has remained elusive largely due to the obvious limitations associated with cross-country studies and the lack of useful data for Africa. 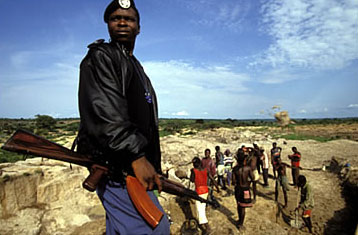 Fig 1: A Rebel Guarding an Illegal Diamond Mine in Angola

The sketchy and weak evidence have not prevented scholars from speculating on the potential causes of conflict. Some have argued that armed conflict is often the result of greed rather than grievances. For example, access to an oil rig or a mine could provide lucrative financial opportunities to rebel leaders to build and sustain rebel organisations which would encourage armed conflict. This could override atypical social motives such as inequality, political repression, and ethno-religious division. Even though intuitively appealing, these theories and explanations do little in terms of resolving the issue one way or the other. For that we would require hard evidence which could be interpreted as causal. Our recent CSAE working paper embarks on a project to address precisely that.

The Study
In particular, the paper aims to systematically explore the causal effect of giant and major oil and mineral discoveries on internal armed conflict onset and incidence in Africa at the grid level corresponding to a spatial resolution of 0.5 × 0.5 degree covering the period 1946 to 2008. Using geocoded data on resource (oil and mineral) discoveries and conflict the paper is able to construct a quasi-natural experiment to establish causality. In other words, we are able to test whether giant resource discovery as an exogenous news shock has any bearing over conflict onset and incidence at the local level in Africa. While doing so, the paper uses a novel geocoded dataset of resource discovery at the grid level. In particular, the new dataset is able to distinguish between 11 different minerals[1] and oil discoveries.

The popular discourse both within the academy and the press is that competition over resource wealth in Africa is the root cause of armed conflicts. Yet this is not borne out in our grid level geocoded data. A quick snapshot of the continental map of mining and conflict locations in figure 2 reveal very little correlation between locations of resource discovery and armed conflict onset. In fact contrary to the conventional wisdom of resource riches triggering conflict in Africa, we find oil and mineral discoveries significantly reduce the likelihood of conflict onset up to ten years post resource discovery in a simple pooled cross-section set up with a sample of 47 African countries drawn from the Peace Research Institute Oslo Grid (PRIO-GRID) dataset over the period 1946 to 2008. The effect remains negative but statistically insignificant or weakly significant in most specifications when we control for grid-specific fixed factors and time varying common shocks. We observe little or no heterogeneity in the relationship across resource types (minerals or oil), size of discovery (giant or major), pre and post end of the cold war, and quality of national political institutions measured by Polity2 score. We also analyse the effect of resource discovery on conflict incidence using a panel of 47 countries covering the period 1989 to 2008. Even though the negative effect of resource discovery on conflict incidence remains in a pooled cross-section set up, the trajectory of the coefficient appears to be somewhat different once we control for grid and year fixed effects. The effect stays negative for the first four years post discovery and then it turns positive and peaks at eight years post discovery. This could be due to a decline in the incidence of ongoing conflict up to four years post discovery news shock. Beyond that point production starts in these newly discovered locations which trigger an increase in the conflict incidence. The heterogeneous effects of discovery and production appear to be consistent with the observation that the prospect of future production affects conflict onset and incidence less than the actual past production. 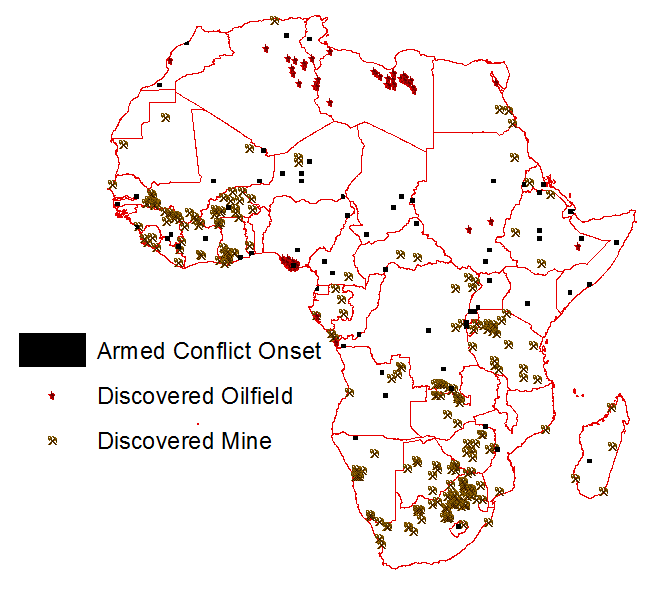 The obvious question here is via what channel resource discovery affects conflict. Natural resource induced higher income at the local and national levels could improve state counter-insurgency capacity and reduce individual incentives to fight. Alternatively, natural resource induced higher state revenue could incentivize capture and trigger conflict. Evidence appears to be favoring the former theory rather than the latter. Our analysis finds that resource discovery (oil and minerals) improves luminosity at the grid level which in turn reduces conflict onset and incidence.

For the technically minded, our identification strategy relies on the exogenous variation in the discovery dates of giant and major mineral deposits and giant oil deposits. Our dataset codes a mineral deposit as giant if it has the capacity to generate at least USD 0.5 billion of annual revenue for 20 years or more accounting for fluctuations in commodity price. Similarly, major mineral deposits are those which could generate an annual revenue stream of at least USD 50 million but not as long life as a giant reserve. A giant oil or/and gas (including condensate) field is defined as a field that contains at least a total of 500 million barrels of ultimate recoverable oil or gas equivalent. Even though it is possible to identify the area where minerals or oil are likely to be found using geological data, it is not possible to accurately predict the timing of giant and major discoveries. Therefore, the discovery dates of giant and major reserves are exogenous. One might argue that politicians and government could manipulate the announcement of the precise timing of discovery. Our data is immune to such possibility as the discovery dates are independently verified and documented using multiple sources.

Lessons
In spite of her colonial and post-colonial history as a supplier of raw materials, a vast majority of African natural wealth remains untapped. These resources are expected to be exploited over the coming two to three decades amid increasing global demand for raw materials. The expected steady depletion of natural resources and the favorable global commodity prices presents Africa with an opportunity to harness this wealth for improving state capacity and living standards. Our research suggests that both of these factors could significantly contribute towards eradication of civil conflict from the African continent.

References
Arezki, R., S. Bhattacharyya, and N. Mamo (2015). “Resource Discovery and Conflict in Africa: What Do the Data Show?” CSAE Working Paper No. 2015-14, University of Oxford.