The economy wide impact of HIV/AIDS and the funding dilemma in Africa: Evidence from a dynamic life cycle horizon of Uganda

Posted on January 12, 2016 by Judith Kabajulizi

Despite remaining a major killer in Africa, the HIV pandemic has been tamed medically into a chronic disease through advances in treatment drugs – antiretroviral therapies (ARTs). However, the full economic costs, over a lifecycle horizon, of keeping people on treatment and implementing prevention measures, are still not fully quantified and are still unfolding. Indeed, the economic effects of the HIV/AIDS disease, and also the economic effects of various interventions need to be better understood. Sub-Saharan Africa (SSA) disproportionately bears the burden of HIV/AIDS compared to the rest of the word. Over 70% of the people living with HIV (PLHIV) are resident in SSA, of which 82% are adults (UNAIDS, 2010, 2014). The commitment by governments to provide HIV treatment (ART) to those who need it constitutes a long-term financial liability which can be conceptualised as a ‘quasi-debt’ liability – see (Collier, Sterck, & Manning, 2015). On the other hand, it is also evident that development assistance for health (DAH) has significantly shifted away from HIV/AIDS and its sustainability is not certain (Institute for Health Metrics and Evaluation – IHME, 2014).

Kabajulizi and Ncube (2005)’s paper is aimed at assessing the long-term economic impact of HIV/AIDS taking into account various modes of funding HIV/AIDS interventions, using a computable general equilibrium (CGE) model. Taking Uganda as a case study for analysis, this paper specifically aims to: (i) predict the economic impact of AIDS through the human resource impact channel and the source of fiscal space for HIV/AIDS impact channel, and (ii) propose policy options for funding HIV interventions in the long-term. Uganda is purposefully selected as a case study to reflect a country with high prevalence rates of HIV and currently resource-constrained but with prospects of future natural resource exploitation. This study extends the previous CGE methodologies by incorporating updating equations that capture the cost impact channels of HIV/AIDS interventions and the source of fiscal space for HIV. Specifically, given the long term debt liability feature of HIV interventions, we explicitly model the increase in government health spending resulting from additional spending due to HIV/AIDS financed by foreign grants, direct taxes or foreign borrowing. We report the impact on economy-wide wages/rents, sectoral growth rates and GDP shares, the country’s debt burden, in addition to the impact on growth rate in GDP, investment, consumption, exports and imports.

The findings strengthen the case for policy makers to frontload investment in HIV treatment and prevention. There are many benefits for doing so. The results show the negative impact of HIV prevalence in Uganda if government does not implement targeted treatment and prevention strategies. Relative to the base case, the economy experiences an increase in the cost of production from the rising cost of labour, all sectors of the economy shrink and overall GDP growth rates decline while the domestic government debt as a share of GDP rises. On the other hand, if the government intervenes by scaling up treatment and prevention of HIV, the negative impacts are reversed and the economy thrives from a growing labour force supply and resource flows to HIV interventions. Foreign-aid and direct taxation are both potential sources of fiscal space for HIV albeit the differential impacts on sectoral growth and government debt levels. The results demonstrate that there is capacity for Uganda – and other LICs grappling with similar fiscal challenges – to mobilise domestic resources to fund HIV interventions by increasing revenues from direct taxes. Kabajulizi and Ncube also propose that in the short to medium term, aid-for-health be increased in order for government to meet the future HIV/AIDS obligations. The main results are presented in Figure 1 and Table 1.

Figure 1 – Uganda sectoral GDP growth, with and without HIV intervention 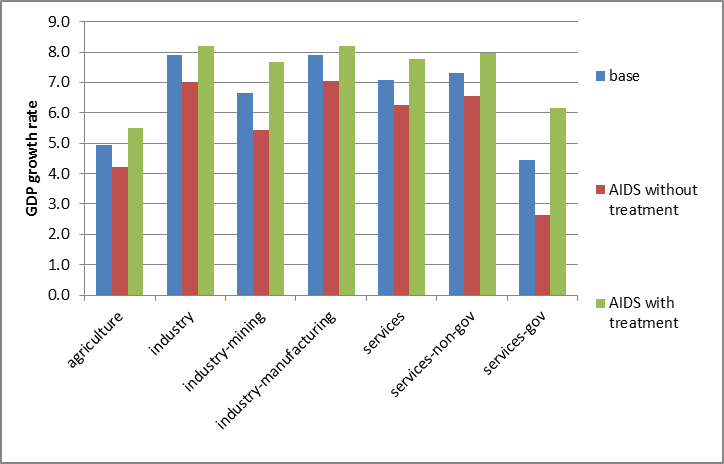 The impact on government debt varies accordingly. When government is faced with escalating healthcare costs arising from palliative care for PLHIV, under the aids-no-treatment scenario, government adjusts its spending pattern by reallocating the available resources and borrowing from foreign sources only when there is a shortfall in the budget. This adjustment generates foreign debt as a share of nominal GDP at 8.4% in 2040 (see Table 1). For the same simulation scenario, the domestic debt as share of GDP rises to 21.2% in 2040 under the aids-no-treatment scenario. The result from this paper also shows that additional funding for HIV, whether from aid or from domestic taxation, mitigates the escalation of the debt to GDP ratio. The mitigation in the escalating debt to GDP ratio is made possible by a combination of both lower borrowing rates (and lower interest payments) and the relatively higher growth rates in GDP.

Kabajulizi and Ncube’s research has relevant policy implications. When government undertakes treatment and prevention programmes for HIV, the economy benefits as shown by relatively higher GDP growth rates, when compared to the base. The treatment for PLHIV translates into higher rates of life expectancy of PLHIV as well as increased participation in productive activities for both the infected and affected people. This paper has also demonstrated that the source of fiscal space for HIV has implications for the rate of GDP growth and country’s debt to GDP ratio. Results have shown that the aid-funded and the tax-funded HIV programmes generate similar growth in GDP as well as very similar rates of foreign debt as a share of GDP and the same level of domestic debt as a share of GDP. However, in terms of sectoral impacts by the funding sources, when compared to the base, the aid-funded HIV programmes scenario generates a decline in GDP at factor cost for industry while the tax-funded scenario generates a decline in agriculture. The difference between the sectoral outcomes for each financing scenario is however relatively modest.

Furthermore, Kabajulizi and Ncube’s analysis provides evidence for the case for donors and policy-makers to frontload investment in HIV treatment and prevention, by showing the significant economic benefits from doing so. It has been demonstrated that foreign aid is a valid source of funding HIV in LICs like Uganda. Given the scarcity of resources and the benefits of increasing spending on effective prevention and on treatment as soon as possible, it is desirable that development-aid for health be increased in order to limit the future HIV/AIDS obligations and facilitate the ability of governments to meet these. The paper has also shown that LICs like Uganda have the capacity for domestic resource mobilisation through direct taxation to fund HIV programmes. It is therefore imperative that policy makers – in Uganda and other LICs grappling with similar challenges – devise means to increase revenue for which the most obvious source would appear to be direct taxes particularly tapping into the large informal sector. We recognise that raising taxation is a sensitive political issue. However, taxation that is anchored to quality health service delivery can be attractive to the citizenry. It is therefore crucial that while taxes rates are increased, the quality and quantity of health services should be stepped up.

This entry was posted in Uncategorized and tagged Aid, Health, HIV/AIDS. Bookmark the permalink.