Dust and Death: Evidence from the West African Harmattan

Environmental events can have profound health-related, social, and economic impacts. These have the potential to be particularly salient in poorer countries, where individuals have fewer strategies available for coping or adapting to shocks. A new paper by Adhvaryu et al (2016), ‘Dust and Death: Evidence from the West African Harmattan’, finds perilous effects of natural seasonal dust pollution on infant and child survival across West Africa. The study also surfaces new evidence on how parents respond to environmental events, and how the impact of these events has changed over time.

The dry season in West Africa is marked by the harmattan phenomenon, in which strong trade winds pick up vast amounts of fine particulate matter from the Sahara and deposit it across the region. Previous studies in public health have suggested that the occurrence of the harmattan may be linked to meningococcal meningitis outbreaks, but the broader impacts of this environmental phenomenon on child survival and wellbeing have not been studied 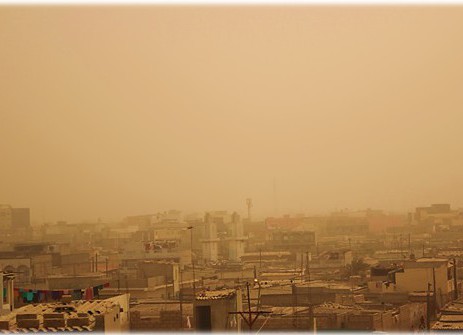 Adhvaryu et al. use a methodology that combines geospatial measures of dust exposure for twelve countries in West Africa with detailed birth histories from the nationally representative Demographic and Health Surveys. Their baseline approach compares children from the same village exposed to different levels of dust in utero by virtue of when they were born, while also netting out variation in mortality that might be due to timing of birth, country-level trends in mortality, or varying seasonal patterns in typical mortality across the countries in their sample. Even narrower comparisons of children born to the same mother but exposed to different levels of in utero dust give similar results.

Adhvaryu et al. show that, while there are deleterious consequences of in utero dust exposure, economic adaptation has led to lessening impacts. In particular, they find evidence that parents provide health investments for children exposed to dust after birth that may mitigate the mortality effects of exposure and the morbidity outcomes for survivors. Second, they show that the lethality of dust has diminished over time. This is not because of reductions in the amount of dust to which African children are exposed, since dust exposure shows no trend over time. Rather, the declining impact of dust exposure on child survival is concentrated in countries where economic development has improved and general health conditions have strengthened. While not conclusive, this last piece of evidence implies that economic growth—and in particular, growth in health spending—may render countries more able to mitigate large-scale environmental shocks.

This entry was posted in Uncategorized and tagged Development, Health, Pollution, Public Goods. Bookmark the permalink.