Why self-employed women earn less: Building a search-match model with data from Ghana

In many African labour markets, women are over-represented in sectors where earnings gaps are largest. For example, in urban Ghana, self-employed women outnumber self-employed men by a ratio of nearly 3:1, but male earnings are double female earnings in that sector (at the median). In wage jobs, by contrast, there are nearly 50 percent more men than women, but their earnings premium is far smaller (around 25 percent at the median). Controlling for worker heterogeneity can only partially account for these patterns.

Figure 1 – Sex Earnings Gaps across Different Sectors of the Economy 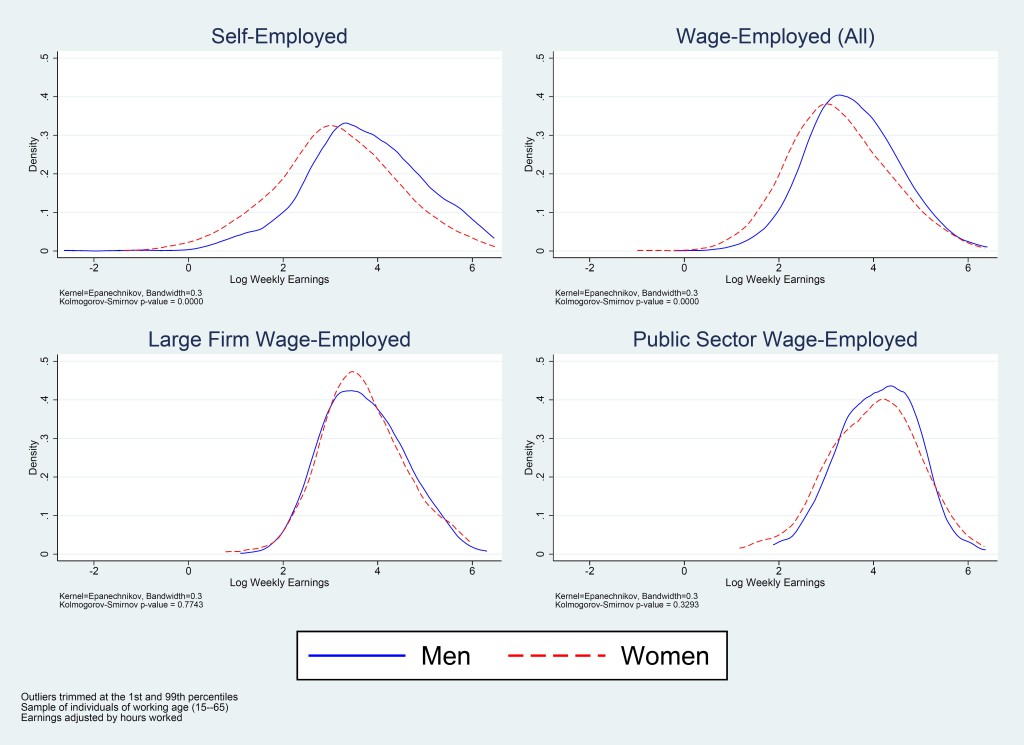 Log of weekly earnings for women and men in different sectors, using pooled data from CSAE’s Ghana Household Urban Panel Survey (2004-2013). Earnings gaps are larger in the least formal sectors of the economy, even though this is where women work most.

In our 2016 CSAE working paper, we build a search-match model, which can help explain these trends. Our model allows workers to choose between wage-employment, where they must match and work with a firm, and self-employment, where they work for themselves. However, there are frictions associated with moving into these jobs, so individuals queue while they wait in a third unemployment sector.

Vitally, we allow for worker heterogeneity along two dimensions. Workers differ in terms of their marginal product in self-employment, determining not only how well they fare as an entrepreneur, but also their bargaining position with firms, and hence their potential wage. However, the labour force is also split into women, who face discrimination, and men, who do not. We introduce discrimination in a very simple way. Although firms are homogeneous ex ante, women’s matches face some extra probability of being immediately destroyed. In effect, this is like each firm having some fixed proportion of its HR team being prejudiced. If a woman’s application ends up with a prejudiced member of the HR team, it is rejected.

Solving and simulating this model by drawing on urban Ghanaian data (collected by CSAE 2004-2013) not only recreates the empirical picture described above, but also produces one particularly striking result: adding wage-sector discrimination into the model produces earnings gaps across all sectors, even if the underlying ability distribution for women and men is identical. This is surprising, because it is not clear a priori where the extra ability ‘goes’. Even if able women are pushed away from wage-employment, surely they must go somewhere else!

To resolve this puzzle, we can think in terms of Roy’s model of occupational choice. Adding discrimination into the model pushes women even further away from the job in which they have comparative advantage. In fact, our model’s equilibrium is characterised by finding ‘cut-off’ or threshold levels of ability, above and below which workers will only accept certain jobs. The most able workers will only ever take self-employment opportunities because, relatively speaking, wage jobs are not worth their time. The inverse is true for the least able workers. Meanwhile, workers in the middle of the ability distribution will be willing to take both types of jobs – since it takes time for either type of job opportunity to come along, it does not make sense for these workers to fully specialise. It turns out that these ability cut-offs are endogenous, so adding discrimination into the model causes them to change.

This has direct implications for the make-up of each sector. Firstly, unemployed women are less able, on average, than unemployed men, because it is the lower ability female workers that find it harder to get a job when firms discriminate. For exactly the same reasons, the self-employment sector becomes flooded by lower ability women – the least able have to consider self-employment, given the extra frictions associated with obtaining wage work. Finally, the average earnings of female wage employees is reduced by discrimination, because it is higher ability wage-employed women who are pushed away from the wage sector first. By adding discrimination into the model, these women are suddenly willing to take both wage- and self-employment job opportunities, even if those self-employment jobs had not been in their interest beforehand.

Why should we care about these results? Overall, they remind us that we need to think about the labour market as a whole, when trying to understand differences between women and men in self-employment. In our model, although the largest earnings gap arises amongst the self-employed, this has nothing to do with the overall ability distribution for women and men, but also nothing to do with extra frictions, such as credit constraints, within the self-employment sector. Instead, the main market failure occurs in the wage sector, where earnings gaps are far smaller. Thus, if the mechanisms in our model match reality, simply targeting training and micro-finance initiatives at the female self-employed may provide only a partial fix to earnings inequality in the informal economy.

This entry was posted in Jobs, Finance and Skills, Uncategorized and tagged Development, Employment, Firms, Labour. Bookmark the permalink.