Labour at #OxCSAE2017: The value of reference letters and should we now use FitBits to measure productivity? 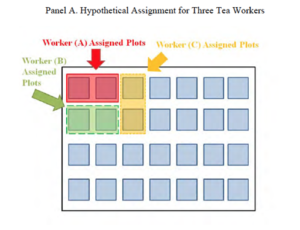 Labour is traditionally a popular topic at the CSAE Conference. This year’s conference had a total of six sessions on Labour, with 24 papers presented. Over the next days our team of PhD bloggers will present you with a selection of papers from the conference.

Marc Witte, Lukas Hensel and Elwyn Davies, all DPhil students at the University of Oxford, kick off with a selection of papers on labour economics and focus on peers and motivation at work, FitBits to measure productivity, reference letters, public salary wages and downward nominal wage rigidity (yes, it exists!).

Peers and Motivation at Work: Evidence from a Firm Experiment in Malawi

What makes you become more productive at your job —  working next to someone you like or next to someone who’s really good at the job? Jason Kerwin (University of Minnesota) and co-authors tried to shed light on the mechanisms behind peer effects at the workplace by randomly allocating pluckers on a tea estate in Malawi to a specific plot on each field. In different words, if the person plucking tea leaves next to you varies exogenously, how does this affect your own productivity? The authors provide evidence for positive, significant peer effects in this context: If your neighbouring pluckers are 10% more productive, then — as a consequence — you’re a little more than half a percentage point more productive. This effect is not very big economically, but statistically robust. 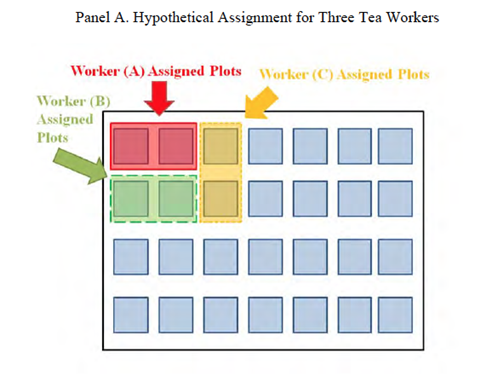 The assignment of tea workers.

Subsequently, the authors look at the mechanisms behind this finding: Job incentives and learning can be ruled out as drivers of the effect, and the effects are actually larger for pluckers who aren’t friends — so it’s not a socialisation aspect, either. With the help of a follow-up choice experiment, the researchers find that the majority of workers want to be assigned to a plot next to a fast (high-ability) coworker, even if they had to pay a little bit for that. This suggests that it’s the psychological channel of motivation driving the positive peer effects, something that the pluckers themselves confirm in open-ended interviews. So next time you choose your desk at work, maybe pick the one next to the really productive colleague, rather than your best friend. Perhaps ideally, they’re the same person…

Can we use FitBits to measure labour productivity?

Accelerometers, such as the FitBit, can measure physical activity. But does this actually also relate to labour supply and productivity? Pieter Serneels (University of East Anglia), with co-authors, measured physical activity of 83 sugar cane cutters in Nigeria. These workers are paid a piece rate, which means that detailed data on productivity is recorded by the firm. The FitBit data on physical activity is indeed a good proxy for labour outcomes, even though 33% of the data had to be rejected due to infeasible activity levels, and strongly correlates to labour supply and productivity. Also when the FitBit results are used to estimate the treatment effects of a health intervention (providing malaria treatment to workers), the results are consistent when using the physical activity data instead of other labour measures.

(The paper is not available online, but can be requested from the authors.)

Nick Barton (with Tessa Bold and Justin Sandefur) presented results from a massive teacher hiring programme in Kenya. Their goal was to assess the size of the public-sector wage gap. In 2010 the Kenyan government set out to hire 18,000 new civil service teachers. Applicants were hired following a centrally determined ranking algorithm which allowed the authors to employ a clever fuzzy RDD strategy with district specific thresholds. Their results suggest an astonishing public-sector wage premium of more than 100% for teachers. Further analysis of the authors find that, despite this wage premium, public sector teachers’ self-reported public job-motivation declines over time relative to their peer in the private sector. All of this suggests that the public-sector premium is not driven by efficiency concerns, but might rather be driven by rent- sharing of actors.

Economic shocks and wages in Indonesia

Do wages move downward when there is an economic downturn? Lukas Hensel answers this question in his paper on downward nominal wage rigidity in Indonesia. He test for this by using transitory labour demand shocks induced by plausibly exogenous rainfall fluctuations. The results suggest that nominal wages decrease when rice production is hit by late monsoon arrival only if prevailing wages levels are sufficiently high. When current wage level are relatively low wages do not adjust downwards to negative productivity shocks. Looking at the labour market impacts, there is little evidence on negative employment consequences of the partial rigidity. This contrast with the findings by Kaur (2015) who find large negative impacts of downward nominal wage rigidity. Moreover, the finding of partial nominal flexibility provides one potential mechanism through which the contradictory findings on the existence of downward nominal wage rigidity could be reconciled (Kaur, 2015; Franklin and Labonne, 2016).

The value of reference letters

A very interesting methodological innovation of the paper is the development of a behavioural measure of search effort, which is a very neat complement to survey based measures. The researchers notify job-seeker about real job-openings via SMS messages and encourage them to apply through a system set-up by them. This allows them to observe application rates and whether applicants attached the reference letters to the application in a real incentivized setting.

This article was written by Marc Witte, Lukas Hensel and Elwyn Davies, all DPhil students at the University of Oxford.

Elwyn Davies is a DPhil student in Economics at CSAE and a Lecturer in Economics at the Queen's College, Oxford. He studies firm growth as well as on the adoption and effectiveness of incentives by firm managers.
View all posts by Elwyn Davies →
This entry was posted in CSAE Conference, Jobs, Finance and Skills and tagged Fitbits, Labour, OxCSAE2017, Reference letters, Wage rigidity. Bookmark the permalink.