Today’s links start, as too often recently, with an obituary. No, I’m not making veiled allusions to the local council elections, but to the passing of William Baumol. Baumol’s famous ‘cost disease’ argued that productivity increases in the tradable sector (he focused on manufacturing) led to substantial increases in the wages non-manufacturing workers despite the absence of any similar gains in productivity in those sectors. There have been many criticisms of Baumol’s theory (many of which I agree with), but the basic observation that a minority of workers in high and increasing productivity activities can have substantial effects on the livelihoods of the majority of workers elsewhere is powerful, and remains underutilised as an explanatory narrative for developing countries.

1.       I’m going to start with something boring, but it’s boring in the best way possible: Martin Ravallion goes into detail in a discussion of the merits of a universal Basic Income Guarantee. He talks sensibly about the logic behind a basic income, about the relative merits of a universal programme compared with targeted programmes and its likely effect on incentives to work. He argues based on common sense and practical experience, acknowledges the grey areas where the basic income resembles more standard social protection, and acknowledges where trade-offs will have to be made. It’s not exciting, but it is careful. Related: Raj Chetty’s work on The Death of the American Dream also gets the VoxEU treatment here. It’s had a lot of coverage before (including here), but really is fascinating.

2.       A few papers have shown that giving money to male entrepreneurs often has higher returns than giving money to female entrepreneurs. Lots of people explain these results away, arguing that women face more barriers to success so cash is a more binding constraint for men than women. One explanation that hadn’t occurred to me is that the money has the same effect for both sexes, but for women the effect is on a household enterprise which isn’t covered in the data. This is quite plausible: in many households where a man and a woman both run an enterprise, the male may be running the enterprise with stronger growth potential. A woman receiving a cash grant maximises household income by investing the money in the male-operated enterprise. Markus Goldstein has a really good blog examining a paper which finds some (tentative, not-1000%-convincing) support for this theory.

3.       “If I told you that a school or a hospital could pass a cost-benefit test even after ignoring the benefits to the pupils or patients, you might reasonably conclude that the school and hospital were impressive organisations. You’d also tell me it was a very strange way to do cost-benefit analysis.” Tim Harford panders directly to all of my priors in a very thoughtful piece on immigration. He doesn’t belabour the point that immigrants (or expats, as we describe ourselves when we become migrants) bring economic benefits to native-born workers, even excluding the benefits to the migrant. Instead he focuses on the human aspect, showing that the mindset that we adopt when thinking about migration is strikingly absent of the most basic human test: how would I feel if I was in their place?

4.       David McKenzie wears his Grinch hat and considers the vogue for ‘transparency in science’ and sees a way of pimping up underwhelming research to improve publication prospects.

6.       Lastly, a rambling, er… ramble, about basketball. Growing up, my favourite player was Magic Johnson. I loved everything he stood for: he was unselfish (a pass-first point guard), played the game with joy (have you ever seen him not smiling?) and was completely unconventional (a six-foot-nine point guard!). I loved him so much that I was blind to the obvious fact that he was not nearly as good as Michael Jordan, to the extent that I was unable to enjoy watching Jordan play – and I’m a complete idiot because I missed out on enjoying the greatest player ever. Something similar is happening to LeBron James. There are so many more charming and interesting players, and it blinds people to the fact that he is, by an absolutely massive distance, the greatest player of his generation, and the only one whose claim to rival Jordan wouldn’t get laughed out of court. 538 makes the case for LeBron, again; it’s astonishing anyone still has to do it. 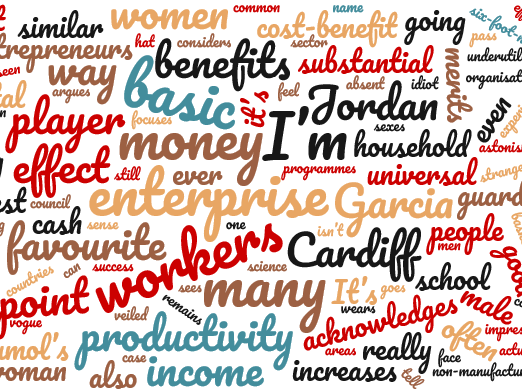