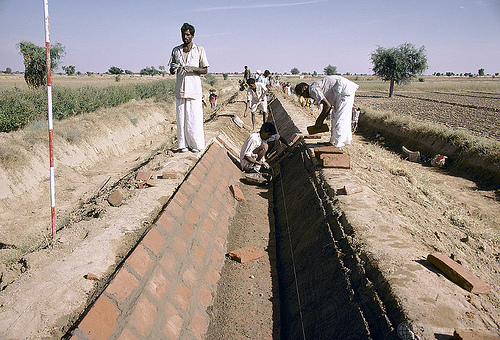 Most of the world’s poor live in rural areas, and at the bottom of the pyramid are landless workers subsisting on casual wage labour in agriculture. Policies that can put upward pressure on agricultural wages are therefore likely to be some of the most effective ways of improving the welfare of the poorest people on the planet.

In principle this could be achieved by introducing minimum wages, but enforcing a minimum wage rate is unrealistic in most developing countries. On the other hand, public works, which typically employ large numbers of unskilled workers to improve public infrastructure, may push wages up. If so, the welfare effects of public works programmes would reach well beyond the people who are directly employed by them.

In recent research, we look at a large-scale public works programme: the Indian government’s National Rural Employment Guarantee (NREG). NREG is an enormous programme by any standard: in the financial year 2010–11, it generated 2.57 billion person-days of employment. It is therefore of considerable interest in its own right. Yet the size also implies that the scheme, notwithstanding the many problems in its implementation, is eminently scalable. Evaluations of small pilot schemes are often criticised on the basis that the observed effects may not be reproducible at larger scales. That critique does not apply here, and the lessons learned should be of broad interest.

The scheme was introduced across India’s 600-odd districts in three distinct phases, allowing us to identify a difference-in-difference-type estimator. Using a decade’s worth of wage data for 250 Indian districts, we find that for each person-day of employment generated by NREG per capita in a district, agricultural wage rates increased by 1.6 per cent. Since NREG generates approximately 3.3 person-days of employment per person per year on average, the implication is that the programme boosted real daily wages in India by 1.6×3.3=5.3 per cent. 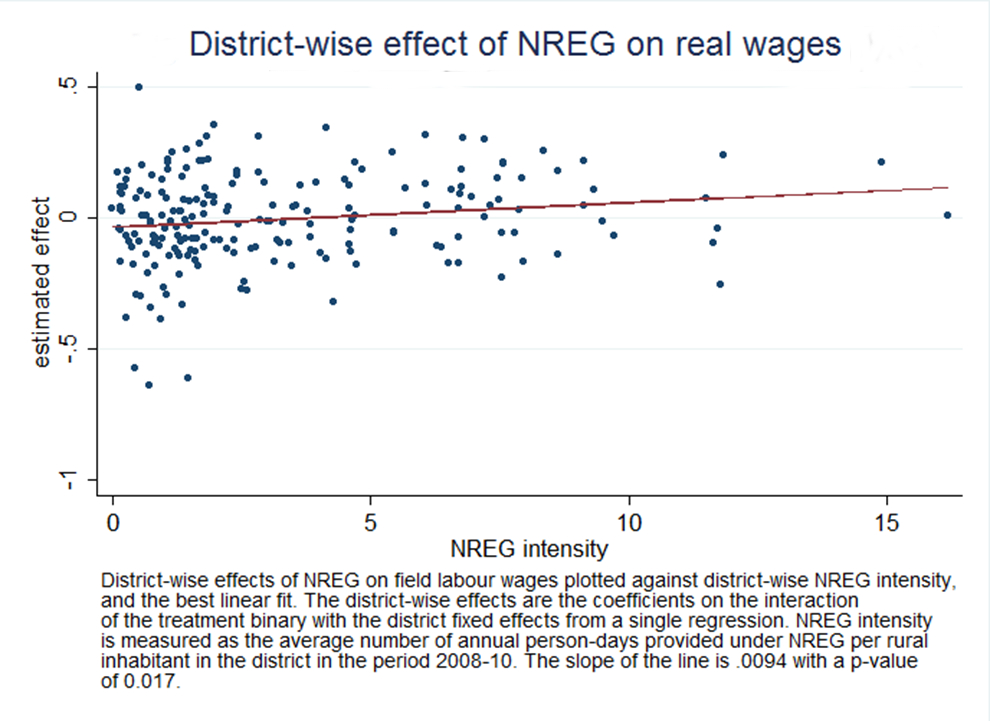 In principle, there are two ways in which a large-scale public employment programme can influence market wages. The first is by shifting up the demand curve for labour, thereby increasing its equilibrium price. The second is that the public goods generated by the programme may increase labour productivity and thus wages. We are not able to separate these two effects econometrically, but we concur with a recent World Bank report stating that ‘the objective of asset creation runs a very distant second to the primary objective of employment generation.’ Our impression is that in reality, the infrastructure built under NREG is often of low quality and unlikely to raise local productivity by much.

Even though the effect on wages is significant in every month of the year, we find that the magnitude is smallest in the agriculturally slack months of March and April. Private-sector demand for labour is low in these months, and the extra slack in the market may reduce the effect of NREG’s labour demand shift on wages.

Clearly, an increase in wage rates is not a Pareto improvement. The other side of the coin is that landowners and other rural employers face higher labour costs. However, this objection does not stop governments around the world from trying to impose minimum wages rates, another market intervention aiming to favour workers. Public works programmes provide governments with an additional mechanism with which to influence wage rates in the rural unskilled labour market. Since the link between agricultural wages and poverty rates are well established, if public works can influence agricultural wages then they constitute an attractive policy instrument to reduce poverty.

For more information, you can find the working paper here (written with Sambit Bhattacharyya, Rajasekhar Durgam and Manjula Ramachandra).

I use economic theory and econometric techniques to study development at the micro-level. My main interest is in the financial lives of poor people, including credit, savings and insurance behaviour. I currently have ongoing projects in India as well as South Africa. My webpage can be found here .
View all posts by Erlend Berg →
This entry was posted in Jobs, Finance and Skills, Policies to Protect the Poor and tagged Agriculture, Infrastructure, Labour, Markets. Bookmark the permalink.