NREGA and rural welfare in India 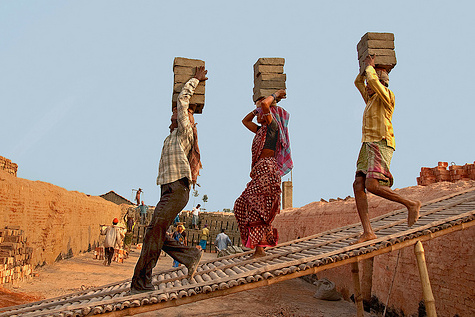 In the evaluation of social programs, the first order concern is their effect on beneficiaries. However, there is a growing awareness about “spillovers” or “peer effects”, which could affect non-beneficiaries. In Mexican villages where PROGRESA cash transfers were implemented, non-eligible households were more likely to send their children to school. Thanks to transfers and loans from eligible households, their consumption also went up.

This post makes a related, but different point: social programs, especially programs other than cash transfers, may also change the market equilibrium, which affects beneficiaries and non-beneficiaries alike. Workfare programs for example, by providing public employment to beneficiaries, may increase private sector wages. Another example is in kind transfers, which deliver basic commodities at subsidized prices and may decrease market prices.

In 2005, the Indian Parliament passed the National Rural Employment Guarantee Act (NREGA), which entitled each rural household to 100 days of employment on public works per year. There is no eligibility condition, and workers are paid according to each state’s minimum wage legislation. The program was introduced gradually across Indian districts from 2006 to 2009 and rapidly reached a massive scale; in 2012, official sources reported 51 million beneficiary households.

In a new CSAE working paper, we compare districts where NREGA was introduced first to districts where it came into force later to estimate the impact of the program on rural employment and wages. We show that the introduction of the program is correlated with an increase in public employment and an equivalent fall in non-public employment. The daily wage for casual work increases by 5.5%. These effects are concentrated during the first half of the year when most NREGA employment is provided. Independent studies yield similar findings. 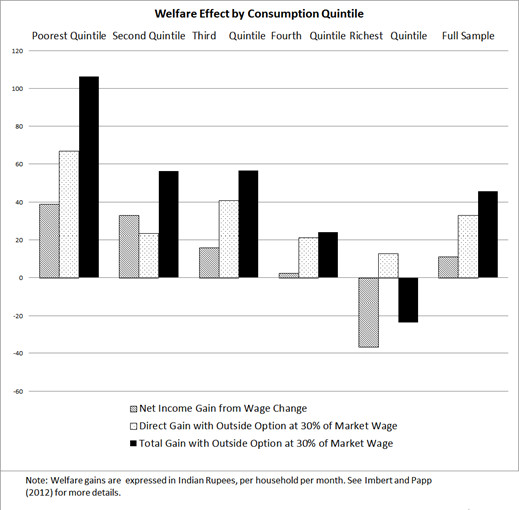 We use these estimates to compute the welfare impact of NREGA for households depending on their monthly per capita consumption. We first consider gains from participation in the program and find that the poorest quintiles are more likely to benefit from public employment provision. We also consider the impact of a rise in private sector wages, which may affect all households, and show that it generates substantial welfare gains to the poor (30 to 60% of total welfare gains) and implies a welfare loss for the rich, who are net buyers of labor.

The first conclusion of this study is that equilibrium effects are important, and should be taken into account to evaluate the impact of social programs on beneficiaries and non-beneficiaries. The second conclusion is that through changes in market prices social programs make some people lose: large landholders are unlikely to participate to NREGA but will see their labor costs rise. Governments may want to use these effects to trigger redistribution, but they may also provoke political resistance.

This entry was posted in Institutions and Growth, Jobs, Finance and Skills, Policies to Protect the Poor and tagged Infrastructure, Labour, Markets, Rural. Bookmark the permalink.