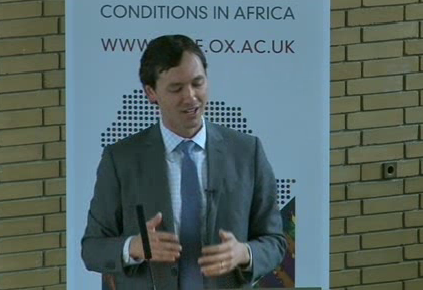 This Monday at the 2013 CSAE conference, Edward Miguel, introduced by James Fenske, paid tribute to Paul Collier for inspiring and informing a lot of his work on Civil Wars in Africa. Since the early 1990’s there has been much emphasis placed on the role of political conflict and violence in constraining Africa’s development. Over 70% of African countries have experienced civil conflict since 1970 and these have had devastating consequences on the human and economic development of the region.

Miguel’s presentation  (based on a new, unpublished paper with Sol Hsiang and Marshall Burke) and current research agenda seeks to build on the ethno-political, cultural and economic factors that have been analysed in the literature and analyse specifically the potential future impact of climate change on conflicts in Africa. His major finding is that there is widespread agreement in the literature and in the data that high temperatures are associated with more violence. In answering the question of whether climate-induced violence might derail Africa’s incipient economic revival, Miguel left a sobering picture and a call for action.

What is the effect of climate on violence?

Their first goal in this new research agenda was to collate and compare existing work being done in this area. They have conducted an extensive literature review and reproduced the results where possible in a common econometric framework (panel data with country and time fixed effects) to allow for comparability. The paper looks at 50 studies, using 37 data sets. The studies come from a range of disciplines using different conceptual frameworks. Broadly speaking they can be separated into three categories:

The historical research uses innovative datasets including tree rings and ocean deposits to investigate the relationship between climate and the collapse of empires. Evidence was presented for Maya, Angkor Wat, Chinese dynasties, and the Akkadian empire. Many of these results confirm the hypothesis but – importantly – do not produce a universal study of societies, and therefore may be subject to looking for “keys under the lamppost”.

Little airtime was given to the experimental psychological studies, but Miguel highlighted that this is a relatively unexplored channel for the impact of climate change. There were a few gasps when the audience was told about Vrij et al.’s (1994) study where Dutch police, in a training exercise, were found to be more likely to shoot at a simulated intruder when randomly placed in a high temperature room (27°C / 80°F) than at lower temperature (21°C / 70°F). The only chuckles of the day were heard when we were told of the research design of Kenrick et al.’s  (1986) study; in which investigators sat in their stationary car at a green light, at the exit to a parking lot, measuring the time taken for people to hoot as well as the intensity.

Most of the weight of Miguel’s argument rests in the third set of studies. These studies are used to quantify the effect of an increase in temperature on violence in Africa. Finding widespread agreement across the studies (21/21), Miguel is confident that their common econometric specification confirms a positive relationship between higher temperatures and violence. The pattern emerges at different scales; ranging from the village level, to the regional, to the country level and even on a global scale. These effects could be “large”: the marginal effect shown in their study indicates that a 1 standard deviation change in temperature is associated with a +11% increase in intergroup conflict. Most of Sub-Saharan Africa is projected to experience average warming of at least 3 s.d. (2°C) by 2050, implying the risk of violent conflict will rise considerably (>30%). Beyond average changes, precipitation variability is likely to increase, potentially exacerbating effects.

What are the channels and what to do about them?

Armed with these findings, Miguel approaches the task of understanding the channels for the influence of climate change. The economic channel seems well established in the literature. Dell et al. (2012) shows that increased temperature reduces economic growth, Lobell et al (2008) demonstrate the effect on agricultural output, and both Graff-Zivin and Neidell (2013) and Hsiang (2010) give evidence on labour productivity. In both the witch killing data and Harari and La Ferrara (2012), lagged growing season weather shocks have a much larger effect than non-growing season weather, suggesting that agricultural output is a key mechanism. However, even with declining reliance on agriculture, African economic growth rates have not become less sensitive to high temperature over time: -1.5% growth per 1°C increase in temperature.

With global mitigation efforts currently stalled politically, an adaptation agenda for Africa is desperately needed. Adaptation otherwise is likely to be partial. Even in the USA, the sensitivity of agricultural output and crime to temperature is nearly unchanged over the past few decades (Burke and Emerick 2012). The shape of this strategy remains unclear but much emphasis during the Q+A was placed on institutions and their channel on the adaptation and management of climate shocks. This seems to be relatively unexplored by Edward Miguel and his colleagues at the moment but he seemed sure that it is central to the story.

Edward Miguel and his co-authors have brought together the literature of the impact of climate change on violence in a robust and clear fashion that deserves attention both in academic circles and in the policy debate. Showing a large marginal effect of climate shocks, this literature prompts a rethink of the way we conceive of the costs of climate change. With much room for further discussion and research, it is important for researchers to remain open to other disciplines and frameworks that are being explored on this issue.

You can watch the entire keynote speech here.

This entry was posted in Institutions and Growth, News and Updates and tagged Agriculture, CSAE2013, Development, Growth. Bookmark the permalink.