The recent trade literature has shown a growing interest in the analysis of barriers to trade within countries, especially with reference to developing economies such as China. Apart from pure academic curiosity, this can be explained by two main factors. First, with the expansion of the WTO membership as well as regional free trade agreements, the international barriers to trade are declining rapidly; as a result, intra-national barriers are becoming relatively prominent. Second, barriers within the boundary of a country are likely to be caused by more fundamental market distortions, offering a great opportunity for studying the institutional causes of market imperfections from a trade angle.

Internal barriers to trade are typically in the form of regional protectionism and some of the recent research in this area argues that these distortions may be of similar significance to international trade barriers in affecting market efficiency and thus ultimately welfare.

However, providing evidence for intra-national protectionism is hard. Unlike international trade barriers that can be measured with tariff data or by quantifying non-tariff-barriers, protection by local governments against nonlocal firms within the same country can take many different forms and is typically hidden (especially for practices related to rent-seeking), or at least not explicitly announced or recorded by the authorities or anybody else. The existing empirical literature on China therefore uses implicit measures of protectionism at an aggregate province or industry level: in the absence of significant regional protectionism one would, for instance, expect regional specialisation in production and/or price convergence across provinces to be detectable in the data. The seminal study in this literature by Alwyn Young (2000) compared data from China’s Socialist period with those after the economic reforms and concluded that while China significantly opened up internationally over this time period it had also become internally fragmented. Since then a number of studies have either confirmed or rejected these findings (e.g. Bai et al, 2004; Poncet, 2005; Fan and Wei, 2006; Holz, 2009) but were always confined to analysing protectionism implicitly by investigating aggregate sector or province-level data for signs of specialisation, price convergence etc.

Our new research paper on ‘Intra-National Protectionism in China’ is, to the best of our knowledge, the first study to provide direct, firm-level evidence for intra-national protectionism and market fragmentation in China. We do so by investigating the unique case of public disclosure of ‘illegal’ drug advertisements by provincial Food and Drug Administrations (FDAs).

In China’s pharmaceuticals market a large number of relatively small enterprises are vying for a share of the large ‘over the counter’ market in generic drugs (China’s health spending is quite large compared with other middle-income or even OECD countries). Since advertisement is crucial for these firms and drug advertisement rules (set by the State FDA) are ambiguous and subject to interpretation, local FDAs can selectively inspect and ‘disclose’ nonlocal firms for ‘illegal’ advertising (i.e. naming firms and sharing information about their violation, but also some form of punishment, including cancelling advertisement licenses).

Why would these FDAs discriminate against nonlocal firms? First, though the provincial FDAs are linked to the State FDA in Beijing through a clear administrative hierarchy, their funding as well as decisions about the appointment of their senior officials is determined by the local province government. Second, China’s system of fiscal decentralisation incentivises provinces to push local firms so as to increase their tax revenue – so far so competitive. However, given the institutional setup and the ambiguous advertisement rules, this also incentivises provinces to protect local producers and discriminate against firms from outside the province.

Our descriptive and regression analysis goes to show that the patterns of ‘disclosure’ disproportionally expose firms from outside the province, thus constituting local protectionism on behalf of the provincial FDAs. 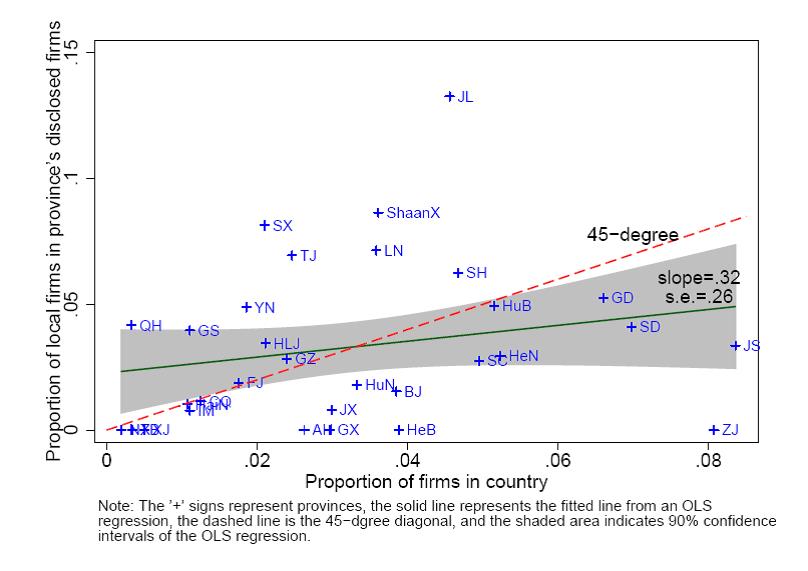 The above figure provides a first illustration of the discrimination we detect in our sample of all state-owned and all medium- and large non-state firms (annual sales in excess of around $600,000 in year 2000 values) in China’s pharmaceutical industry over the 2001-2005 period: if we assume that all firms sell their drugs in all 31 provinces then in the absence of protectionism the share of local firms being disclosed should be in line with the relative size of the local pharmaceuticals industry (the 45 degree line marked in the figure). As can be seen, on average, local firms get disclosed disproportionally less than nonlocal ones.

Since the assumption that all firms sell their products in all provinces is difficult to maintain, we carry out our regression analysis using additional information on advertisement licenses available for a subsample of three provinces: Jiangsu, Zhejiang and Inner Mongolia. Controlling for a host of other factors at the firm-level, including ownership type, firm size and previous history of disclosure as well as province-level idiosyncrasies, we find that the disclosure probability is between 9 and 13 percentage points higher for firms from outside the province, thus providing direct evidence for local protectionism. Investigating whether this form of protectionism increased or decreased over time we find higher discrimination in the more recent years, thus supporting the original findings by Young (2000) at the aggregate level.

Political Connections and the Patterns of Disclosure

A second aspect of our study investigates the impact of a uniquely Chinese form of political connections on this phenomenon. Political affiliation (lishu) to different levels of government (e.g. county, province or central) could be seen as a means to avoid disclosure or entice local officials to focus their efforts on nonlocal firms. Our results here suggest that local FDAs specifically target nonlocal firms with political affiliation to rival provinces: their probability of disclosure is up to twice that of their unaffiliated nonlocal peers.

Our study is the first to provide direct evidence for intra-national protectionism in China. Using a unique dataset for public disclosure of illegal drug advertisement which we matched to a large firm-level survey for the years 2001-2005 we find that nonlocal firms have an average 10% higher probability of being disclosed as having illegal advertisements, with nonlocal firms with a political affiliation (lishu) to a rival province even more likely to be the target of discrimination.

Since the mechanism we detect points to relatively generic institutional roots of regional protectionism, we believe one might suggest these findings have wider validity beyond the pharmaceutical sector. One policy implication is that reducing intra-national barriers probably poses a much greater challenge than lowering international barriers as the former usually requires much deeper and wide-ranging domestic reforms, both economic and political.

The full paper “Intra-National Protectionism in China: Evidence from the Public Disclosure of ‘Illegal’ Drug Advertising” by Markus Eberhardt, Zheng Wang and Zhihong Yu can be found here.