Our spring term ended a few weeks ago. I teach an undergraduate course that focuses on the economic history of the twentieth century. Unsurprisingly, the Great Depression is a major focus. The current mainstream view is that monetary shocks were very important in causing the initial contraction in the United States, and that the Gold Standard (the system of fixed exchange rates) was the principal mechanism that transmitted these shocks around the world, turning an otherwise normal recession into a prolonged depression. Countries did not recover until they left gold and devalued, which reduced real wages, increased profitability, raised competitiveness, and lowered interest rates.

But what of Africa?

Africa in the Great Depression

The monetary story also seems to hold for Latin America. For Africa, however, the pattern was different. A year ago, one of the MPhil students in economic and social history found no relationship between export recovery and when the colonial power abandoned gold in a sample of African countries.

Indeed, Susan Martin has argued that the entire period between the wars was a long depression for Africa. For commodity producers, export prices had already declined before 1929. Influenced by images of the American dust bowl, colonial administrators intensified coercive efforts at soil conservation. The Second World War was not a reprieve either: for many Africans, the increased wartime demand for commodities was offset by government controls, rising import prices, conscription, and forced labour. Some of my own work has looked at the wartime transition in the rubber industry in Nigeria’s Benin region.

Africa in the Great Recession

A quick look at the World Development Indicators shows that, while African growth rates have slowed since 2007, they have not turned negative. African growth lags Asia, but remains stronger than in North America or the world as a whole. GDP per capita tells a similar story: African incomes have been growing more slowly since 2007, but did not fall on average. Africa has fared better during the Great Recession than during the Great Depression.

Jake Bright suggests a set of reasons for this: African growth, a growing consumer class, modernization of banking and telecommunications, and newly-created stock markets have attracted foreign investment, aided by remittances.

Antoinette Sayeh cautions that countries with export markets in advanced countries have had worse experiences with the depression, as have those still engaged in conflict. Her focus is on two factors: strong pre-recession growth (driven by commodity prices, debt relief, and market liberalization) and cushioning factors (high commodity prices, growth in other emerging markets, lack of financial crisis, and a lack of austerity).

Gareth Austin (whose other work I recommend) is also cautious. African growth has slowed, and Africans faced higher global food prices even before the recession. He suggests that richer African countries felt the recession first, due to their integration into world financial markets. Poorer countries have been hit by a fall in commodity prices. He does, however, suggest several influences that have cushioned the blow: strong pre-recession fiscal and trade balances due to previous structural adjustment, floating currencies, and early recovery in China and India. Can data help us sort through these explanations? The WDI and IMF World Outlook provide data on many of the variables mentioned above. In particular:

Are any of these correlated with relative growth performance between 2006 and 2012? I have posted some naive cross-country regressions below. These are neither careful nor causal, but the results are surprising. Only two variables stand out as predictors of growth through the recession: pre-recession growth, and exchange rate devaluation. 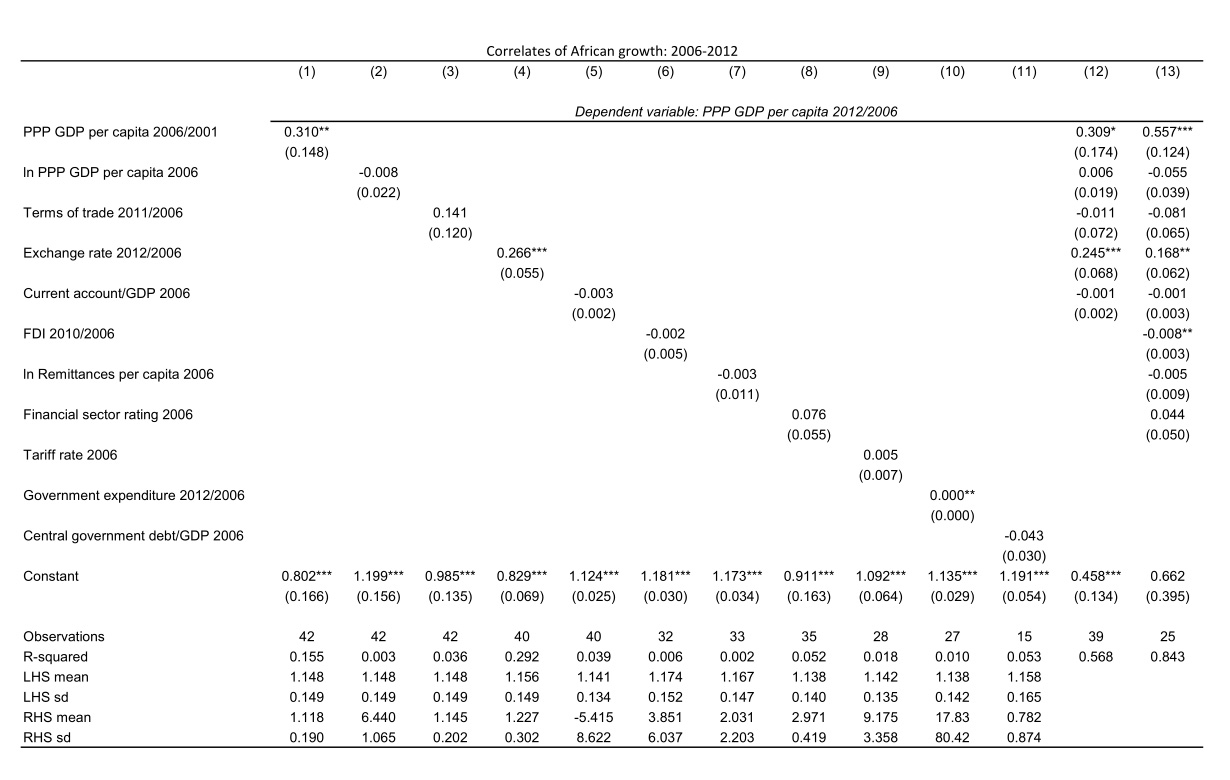 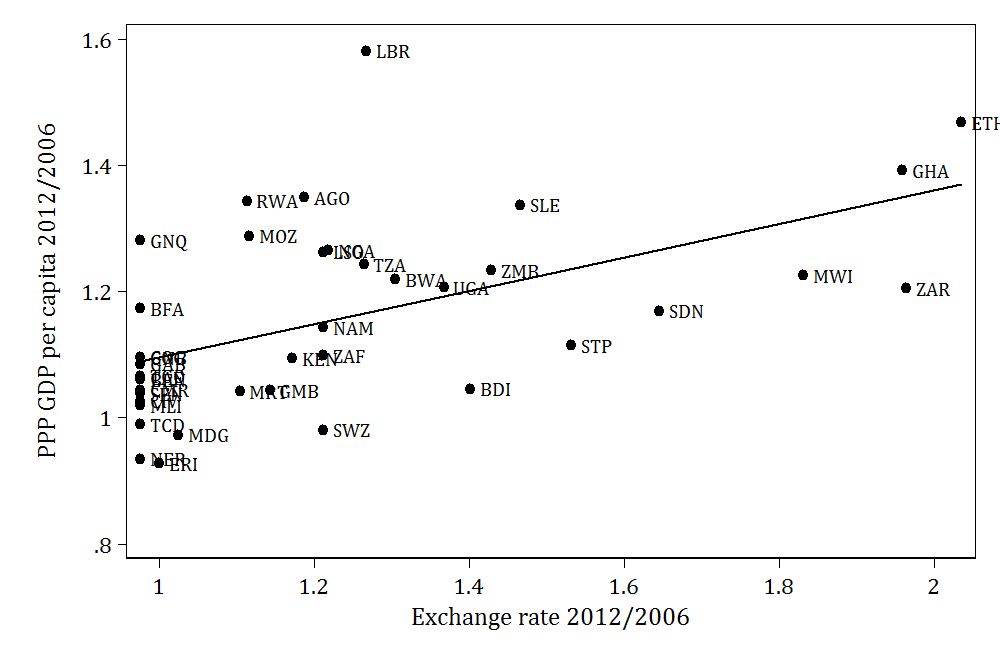 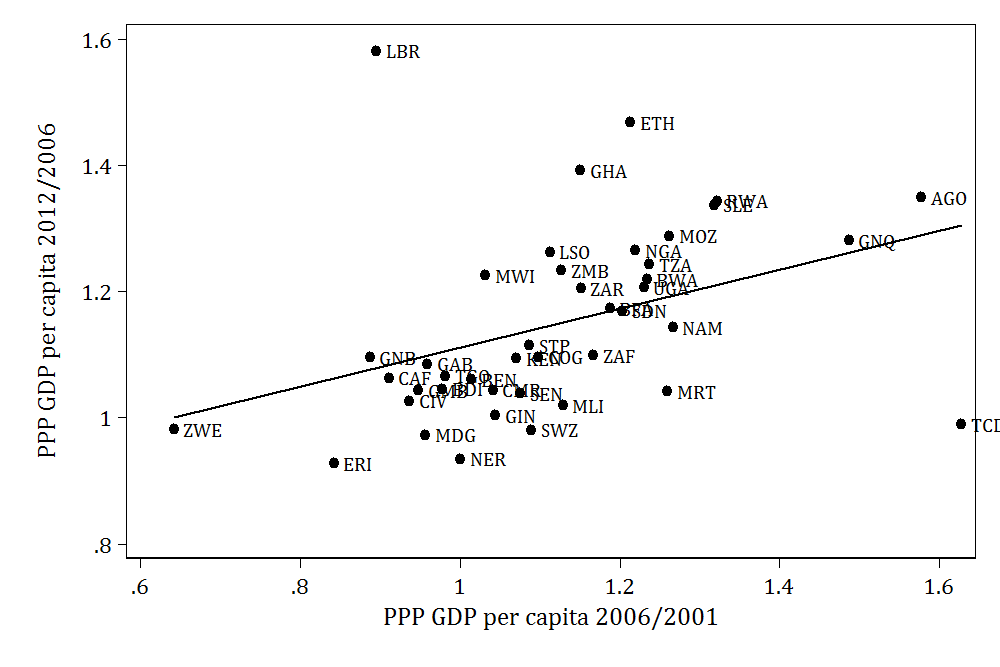 Together, these tell an unusual story: the African countries that have fared well during the Great Recession are those that were doing well before it and those who have devalued their currencies.

You can have a look yourself: download the .do files and data (Stata) used to produce these graphs and tables here.

This entry was posted in Institutions and Growth and tagged Growth, Institutions, Macro Policy Management. Bookmark the permalink.