Banking in Africa has undergone dramatic changes over the past 20 years. While dominated by government-owned banks in the 1980s and subject to restrictive regulation – including interest rate ceilings and credit quotas – financial liberalization, institutional and regulatory upgrades and globalization have changed the face of financial systems across the region. Today, most countries have deeper and more stable financial systems, though challenges of concentration and limited competition, high costs, short maturities, and limited inclusion persist.

In a recent CSAE working paper, we take stock of the current state of banking systems across Sub-Saharan Africa and discuss recent developments including innovations that might help Africa leapfrog more traditional banking models. Our analysis shows a glass half-full rather than half-empty.  Figures 1 and 2 summarize this assessment. Figure 1 shows that the median African country has a significantly shallower financial system than the median non-African country, as measured by three different standard measures of financial depth.  Figure 2, on the other hand, shows that the median African country has made marked improvements over the past decade across all three indicators. And if one drills deeper, one can see that this improvement holds across the whole distribution, not just for the median country. Obviously, when talking about financial systems in Africa, one has to take into account the enormous variation within the region, which also implies different challenges for countries at different levels of economic and financial development, of different sizes and of different economic structures. 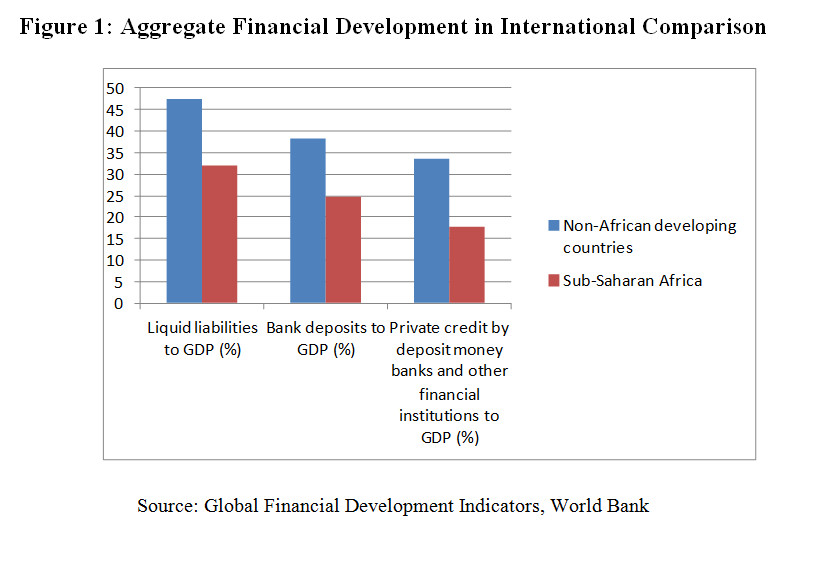 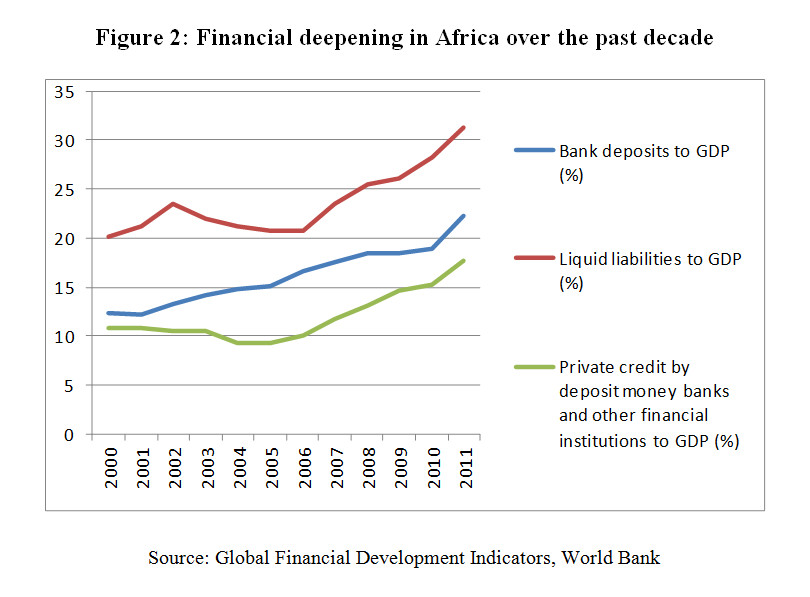 Using other indicators of financial depth confirms the assessment that African banking systems have still some way to catch up. Recent data on the use of financial services by households and enterprises show lower access to and use of financial services.  Banks in Africa are less efficient than in other parts of the developing world and focus on the short end of the yield curve.  On the other hand, African banking systems have proven stable and resilient to global financial shocks in the recent crises. Greater stability is also illustrated in the aggregate balance sheet indicators of African banks, with very high levels of liquidity and capitalization, corresponding to the relative low level of intermediation.

While sharing many characteristics of non-African developing countries, many African financial systems face the quadruple problems of (i) small scale, (ii) high political and economic volatility, (iii) high incidence of informality, and (iv) governance challenges in both private and public sectors. As pointed out by previous analyses, this makes African economies unlikely hosts for efficient and stable financial systems. The combination of these four challenges might also explain why benchmarking exercises that relate country-level financial development to an array of country characteristics fail to explain why African banking systems are less developed than those of other low-income countries.

Critically, these challenges underline the need for innovative solutions in deepening and broadening financial systems in Africa. Recent papers have documented the success of some of these innovative approaches in fostering financial inclusion and deepening across the continent. Kenya’s Equity Bank has expanded its branch network and focused its business model on the provision of financial services to population segments that are typically ignored by commercial banks, with a resulting increase in financial inclusion in the country. Several randomized control trials in Kenya and Malawi have shown how commitment savings accounts can not only help overcome social barriers to savings, but also increase investment and entrepreneurial productivity. An experiment in Ghana showed that rainfall insurance counters farmers’ risk aversion and improves decision making, though effects were largest when insurance was combined with subsidized capital. Finally, mobile-based payment systems can reduce the costs of sending remittances and facilitate risk sharing within the country, as illustrated in the case of the Lake Kivu earthquake in 2008 in Rwanda, which caused individuals living outside the affected area to transfer a large and significant volume of airtime to people living close to the earthquake’s epicenter. Evidence from Niger and Zambia shows that electronic cash transfer via a mobile based system can work as alternative to traditional payment systems, with positive effects on households’ consumption patterns.  These are only a few examples of the financial innovation across the region, in the form of new providers, new products and new delivery channels, that is so critical for financial deepening and inclusion.

Documenting these different innovations and their effects provide a richer picture than the aggregate indicators provided in Figures 1 and 2. However, they also point to a broader challenge for African banking systems: maintaining the momentum towards deeper, more efficient and more inclusive financial systems without losing the stability they have gained over the past decade.

Researchers have helped document the advances of African banking systems over the past decade. But more challenges await for analysts and policy makers alike, including (i) the challenge of long-term finance to meet African investment needs in infrastructure and housing, (ii) the expansion of the financial inclusion agenda from micro- to small enterprises, (iii) an appropriate context-specific response to the regulatory reform wave coming out of Basel, (iv) the challenge to reap the benefits from globalization while minimizing risks, and (v) the political economy of financial sector reform.  While the glass of financial sector development in Africa is indeed half full rather than half empty, there is a lot more to fill!

This entry was posted in Institutions and Growth and tagged Credit and savings. Bookmark the permalink.