A loan shark in sheep’s clothing? Is commercialization of microfinance bad for borrower welfare? 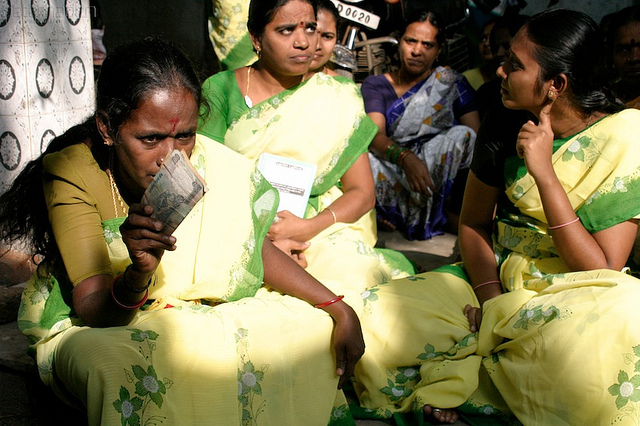 After years of positive media attention and a Nobel Peace Prize for Muhammad Yunus and Grameen Bank, it’s been hard to miss the recent controversy surrounding the microfinance industry. Critical media reports have highlighted the role of high interest rates and the potential psychological burden caused by pressures to repay. In particular, many have questioned whether increasing commercialization of the microfinance sector has led to exploitation of poor borrowers. Indeed, Muhammad Yunus himself has spoken out against commercialization, condemning what he perceives as a “mission drift” amongst microfinance practitioners.

Against this background, CSAE recently had the honour of welcoming Professor Maitreesh Ghatak to present a paper (joint work with Jonathan de Quidt and Thiemo Fetzer ) addressing the crucial question as to how commercialization and market structure in microfinance might affect borrower welfare.

The reality of microfinance in 2013 is one of multiple lending organisations, some for- and some not-for-profit, engaged in varying degrees of competition depending on the location and regulatory environment. This is a far cry from existing theoretical models, which typically assume zero-profit lenders and thus all surplus accruing automatically to borrowers, and in this more complex world the welfare implications of microfinance are much less clear-cut. Thus it is timely and most welcome that this paper tackles issues of commercialization, market power and welfare head-on.

To do so, the authors theoretically model and compare outcomes under a benevolent NGO, a for-profit monopolist, and perfect competition amongst for-profit firms.[1] Furthermore, they speak directly to the issue of the welfare of clients, by departing from the literature’s traditional focus on repayment rates and instead also considering interest rates and (most importantly) an explicit measure of borrower welfare. Finally they simulate the model using the MIX market data, to get an idea of the potential magnitude of the theorised effects.

The authors find that as long as there is perfect competition, welfare under for-profit lenders is likely to be similar to that under a benevolent NGO (although outreach is likely to be lower under perfect competition, since credit is rationed due to lack of information sharing across firms). Thus the first main result is that commercialization per se does not entail a reduction in borrower welfare.

However, in the case of a monopolist, welfare is likely to be severely reduced compared to under a benevolent NGO or perfect competition. Thus the second and arguably most salient implication for policymakers is that whilst they shouldn’t necessarily be too concerned about commercialization broadly speaking, they should be very worried indeed about the potential for for-profit lenders to acquire market power.

Such results are interesting and compelling. Moreover, the strength of the paper lies in its systematic and thorough approach and in the authors’ ability to bring well-reasoned insights from economic theory to elucidate this important debate; the emotiveness of which may have obscured some of the key issues in past discussions.

Building on this, to take the theoretical and policy debate to its next stages, it would be instructive to address certain issues which the paper in its current form does not.

Firstly (as the authors explicitly acknowledge) the model closes down one of the potential channels for commercialization to bring about welfare improvements, by assuming that all types of lender face the same opportunity cost of funds. An argument often cited by proponents of commercialization is that commercial lenders will have greater access to financial markets, decreasing their cost of funds and consequently easing credit rationing and improving outreach. On one hand, the empirical assertions in this argument remain largely undemonstrated; however, it would be useful for the authors to assess its potential quantitative significance for welfare comparisons, perhaps by calculating how much cheaper a monopolist’s cost of funds would really have to be in order potentially to surpass the welfare of a benevolent NGO.

Secondly, a significant part of media criticism has focussed on the psychological costs to borrowers caused by the threat of co-borrowers or lenders imposing sanctions in cases of repayment failure. This has been linked to stress and even suicide amongst microfinance clients . Yet whilst the authors do include the threat of social sanctions in their model, through a “social capital” term S which may be destroyed to punish reneging borrowers, this threat per se does not reduce borrower utility. Indeed, nor do actual sanctions, since they are never employed on the equilibrium path. In order better to address concerns about repayment pressure, the authors might consider introducing a mechanism for sanctions to cause actual disutility in their model; for example by having S stochastically destroyed as a result of noise in observing other borrowers’ outcomes, temporary preference shocks, or even uncertainty about one’s own investment opportunities. Furthermore, whilst in equilibrium such noise or shocks would presumably be zero in expectation, it is possible that there might still be implications for welfare comparisons across market structures.

Thirdly and finally, it would be interesting for future work to consider an alternative explanation for observed defaults and punishments, namely a behavioural story whereby borrowers have time-inconsistent preferences and some degree of naïveté about their own ability to save and repay in the future. Moreover, this might be embedded within a somewhat different model of microfinance, emphasising its possible role as a savings commitment technology: recent empirical work such as that of Banerjee et al. (2013) in Hyderabad has shown that a large proportion of microfinance borrowers may be borrowing to consume rather than invest; and the lack of grace period and the regular repayment instalments in a typical microfinance contract arguably indicate that borrowers must have some outside capital and may be using the product more like a mortgage rather than a pure investment loan.

If microfinance is viewed from this angle, then perhaps some lessons about market structure and borrower welfare might be drawn for example from Heidhues & Köszegi (2010)’s work on the mortgage market. These authors highlight how lenders can potentially take advantage of partially naïve borrowers by imposing large financial penalties when clients fail to stick to repayment schedules. Furthermore, they demonstrate that perfect competition is by no means a panacea for abusive credit pricing, since in fact firms are compelled by market forces to take advantage of consumers’ imperfect foresight.

It is unclear as to exactly which implications would carry through to a similar model of microfinance, but intuitively these kinds of concerns might tip the welfare balance away from perfect competition and back towards a benevolent NGO (although perhaps also lessening the welfare loss of a monopoly). Viewing clients as savers, for example along the lines of work by Karna Basu, may therefore be an important direction for future research on borrower welfare and the commercialization of microfinance.

[1]For the theorists amongst you: the authors take a framework of limited liability and ex-post moral hazard in the spirit of Besley & Coate (1995), emphasising the role of i) dynamic incentives and/or ii) social collateral in providing sufficient incentives to avert strategic default by borrowers. The key assumed difference between perfect competition and a benevolent NGO is that competing firms do not share information, and thus under perfect competition there is a possibility that a defaulter may be able to borrow again. This naturally leads to credit rationing in equilibrium.

This entry was posted in Institutions and Growth, Policies to Protect the Poor and tagged Credit and savings. Bookmark the permalink.