A state that is able to protect its citizens, enforce property rights and provide public goods acts as the backbone of a functional economy. Researchers call this ability of the state to carry out its objectives ‘state capacity’, and there is more and more exciting research being done on its determinants,  on the outcomes associated with high or low capacity, and on how to ‘engineer’ state capacity. This year, the CSAE conference dedicated its closing plenary panel, featuring Timothy Besley, Stefan Dercon and Kieran Holmes and chaired by Paul Collier, to this research.  As Tim Besley pointed out during his introductory remarks, we know that markets take care of themselves, it is a (mal)functioning government we need to be worried about.

One of the most important dimensions of state capacity is the ability to raise taxes. Not just any taxes, but taxes that guarantee as much ‘production efficiency’ as possible (Diamond & Mirrlees, 1971). This capacity is not a given, witnessed by the fact that developed countries raise significantly more income taxes as opposed to trade taxes than developing countries. More broadly, we know that the total tax revenue as a percentage of GDP or the extent to which property rights are protected are highly positively correlated with prosperity (Besley & Persson, 2011 and figure 1 in Acemoglu, 2005, below). 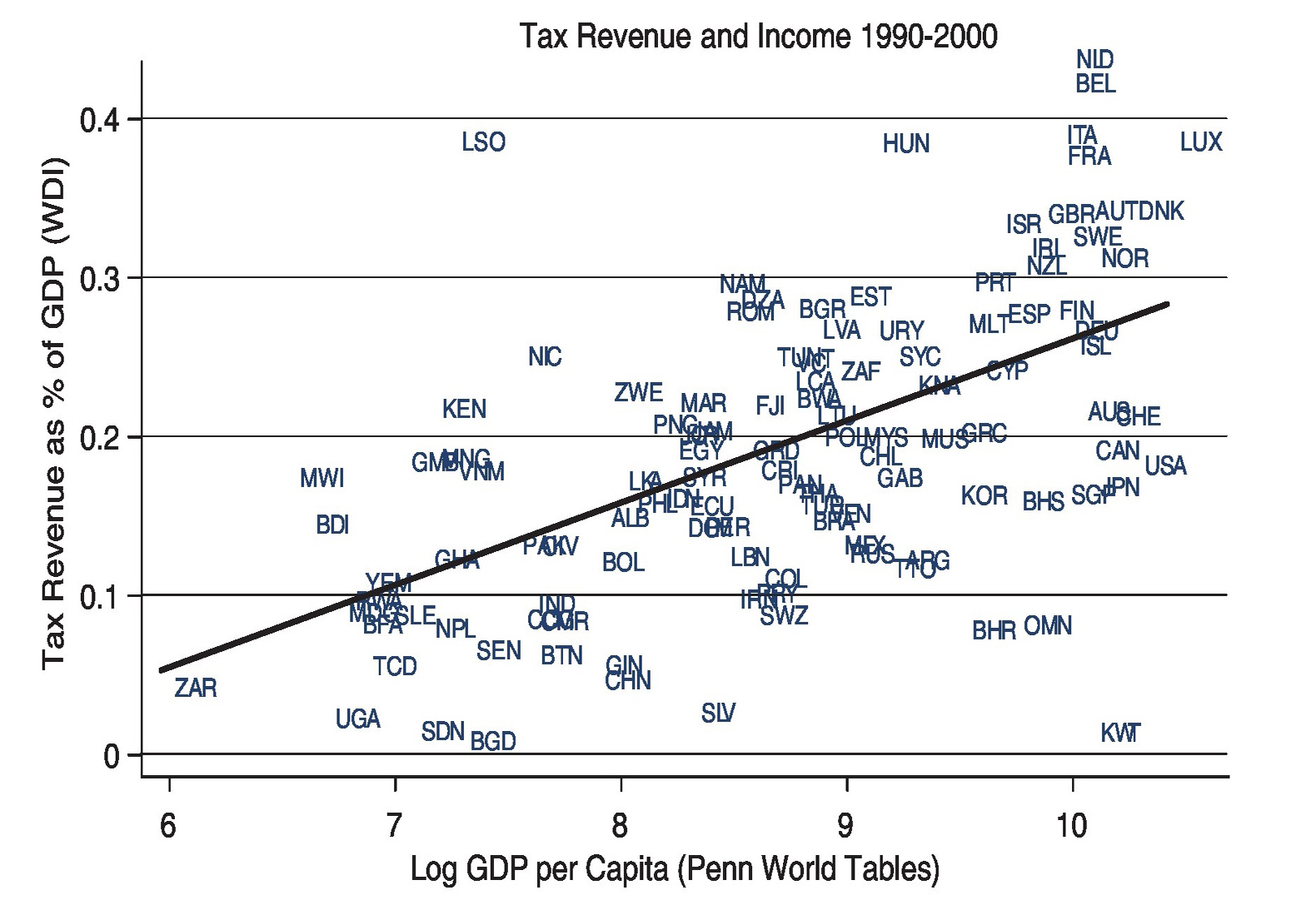 Developing countries routinely struggle to raise half of their annual budget, increasing their reliance on foreign aid. So how do we, in practice, extend the capacity of states to raise taxes? First and foremost, all panellists agree that there has to be a willingness to expand the tax base and collection efficiency. In many countries, elites feel their privileged positions threatened by such reforms and, since they hold power, successfully block them (see for instance Acemoglu & Robinson, 2012). Because of these concerns DFID takes an explicit political economy perspective, focusing on helping countries to self-finance their way out of poverty. Central to self-financing your way out of poverty is, of course, the ability to raise taxes.

It is this ability to raise taxes that the last panellist, Kieran Holmes, has spent most of his career advancing. Kieran currently works with the Burundi government to (re)build its tax capacity. He emphasizes a practical approach, from removing walls in between offices in the tax department to having tax officers report their income. He does, however, emphasize that elite opposition, inexperience and a general fear of accountability are major obstacles.

All panellists pointed to the role of culture, something Besley has recently worked on in the context of the (in)famous Thatcher poll tax. How to accomplish this is not clear, but a culture of tax compliance is, in the end, the most effective way to ensure a sustainable fiscal state. The debate has shown us that state capacity should indeed be at the heart of any development efforts and that significant progress has already been made. However, much more research into measurement of capacity and lack thereof, effective policy tools and the role of culture is needed!