We do two things in our recent CSAE working paper (co-authored by Markus Eberhardt and Dietrich Vollrath). First, we use recent advances in panel time-series econometrics to estimate agricultural production functions on a country-by-country basis. We are able to let both productivity and technology vary across countries. Once we have technology estimates for each country, we look at how that those estimates vary by climate group. We find that countries that are predominantly in cold and/or temperate climate zones have very low elasticities of agricultural output with respect to labor, about 0.15, meaning that the marginal product of labor doesn’t change much as we move labor into or out of agriculture. In contrast, countries in equatorial zones or highland zones tend to have high elasticities, 0.35–0.55, meaning that the marginal product of labor is very sensitive to the amount of labor in agriculture.

The second thing we do in the paper is calibrate a simple model of structural change and development to see how important those differences in technology are for things like the labor share in agriculture or output per worker. What we find is that the low labor elasticities in temperate zones allow economies to respond very rapidly to improvements in agricultural productivity. Given a productivity shock, temperate economies are able to move a lot of workers out of agriculture, because the marginal product of those that stay remains relatively large. Thus the structural transformation occurs very quickly in these economies, and this shows up as more non-agricultural output and higher output per worker. In response to the same shock to productivity, equatorial and highland economies move fewer workers out of agriculture, because the marginal product of remaining workers falls very quickly, and thus their structural transformation is slower and does not provide as big of a boost to output per worker. They certainly benefit from productivity increases, but not to the same degree as in temperate economies.

One easy way to see the implications of agricultural technology is to look at the following figure. This shows, in our model, how much agricultural total factor productivity (TFP) would have to rise in order to push the agricultural labor share down to 3\%, similar to levels seen in rich countries today. The poorest temperate zone countries, like Malawi (MWI), would need TFP to rise by a factor of 10. But an equatorial country like Tanzania (TZA) or a highland one like Ethiopia (ETH) would need TFP to rise by a factor of 20 or 40, respectively. It is easier for temperate economies to transform their economies from agriculture to industry, because their agricultural technology has a low elasticity of output with respect to labor.

If we look across countries, then one reason that some countries are relatively poor may be their agricultural technology has not allowed them to take advantage of productivity increases as rapidly as temperate zone countries. We use our model to calculate several counter-factual situations, and find that roughly 20\% of the variance in cross-country output per worker could be attributable to differences in agricultural technology. Another way of saying this is that the ratio of the 90th percentile to the 10th percentile country in terms of output per worker is roughly 22/1 now. This ratio would be only about 15/1 if all countries had an agricultural technology with a labor elasticity of only 0.15. 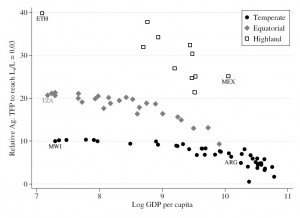 While our research indicates that equatorial and highland zone countries are at a disadvantage in making a structural transformation, we should be clear that our results do not indicate some kind of “geographic determinism”. That is, there is nothing in our research that says those countries are doomed to be poor. You can see in the figure 1 that there are relatively rich highland and equatorial countries. But at any given level of output per worker, equatorial and highland countries will require larger productivity increases to reach higher levels of development than their temperate zone peers.