How to increase your GDP without anyone noticing

African GDP statistics have been in the news recently. Both Ghana and Nigeria in West Africa have seen revisions to their GDP which, in the case of Ghana, has made it a middle income country with per capita GDP, in purchasing power parity US$ dollars, of over 3,000 US$ and in the case of Nigeria has made it the largest economy in Africa.

These statistical innovations clearly do not change the incomes of individuals in those economies but they do suggest that rather dramatic gains have been made recently within Africa. While GDP data is clearly problematic in very poor countries the picture the GDP figures suggest of major improvements in the level of activity in those countries is borne out by a range of data sources. If these figures are correct they suggest a puzzle. Why if progress is being made is there such concern for the lack of employment opportunities, particularly for the young, and why are Nigerians not celebrating more?

My recent working paper for the CSAE looks at these issues, not from the point of view of macro data, but from the perspective of employment creation in Nigeria and the incomes those jobs create. The paper documents three rather remarkable “facts” about job creation in Nigeria over the period from 1999 to 2006. The first is that the number of jobs has increased in line with population. The second is that the number of wage jobs has actually declined in absolute terms. The third is that most job creation has been within the rural sector. In summary, small scale self-employment activities have become increasingly important over a time a relatively rapid GDP growth. As with most data on Africa these “facts” are open to dispute but I argue in the working paper that the evidence from household surveys strongly points towards their broad accuracy.

If correct, this pattern of job creation can help explain the disconnect between the GDP numbers and the working experience of most Nigerians particularly the young. They are told, probably correctly, that their nation’s income is increasing rapidly but they see no access to those increased incomes for themselves. The lack of connect is due to the lack of higher income jobs. The fact that jobs have increased in line with population does not mean that there are plenty of jobs Nigerians want. Some 25 per cent of those aged from 15 to 64, who are not in full time education, are defined as out of the labour force. That means that applying standard definitions they are not seeking work and are therefore presumed not to want employment. It is extremely likely these would take jobs if there were more better paid ones. The problem is not jobs it is the incomes from those jobs and the data we have for 2004 suggest median private sector urban earnings of about US$80 per month. Is it little wonder, seeing the plutocratic lifestyles of those with access to the oil rents, that faced with such job opportunities Nigerians are angry and bitter? 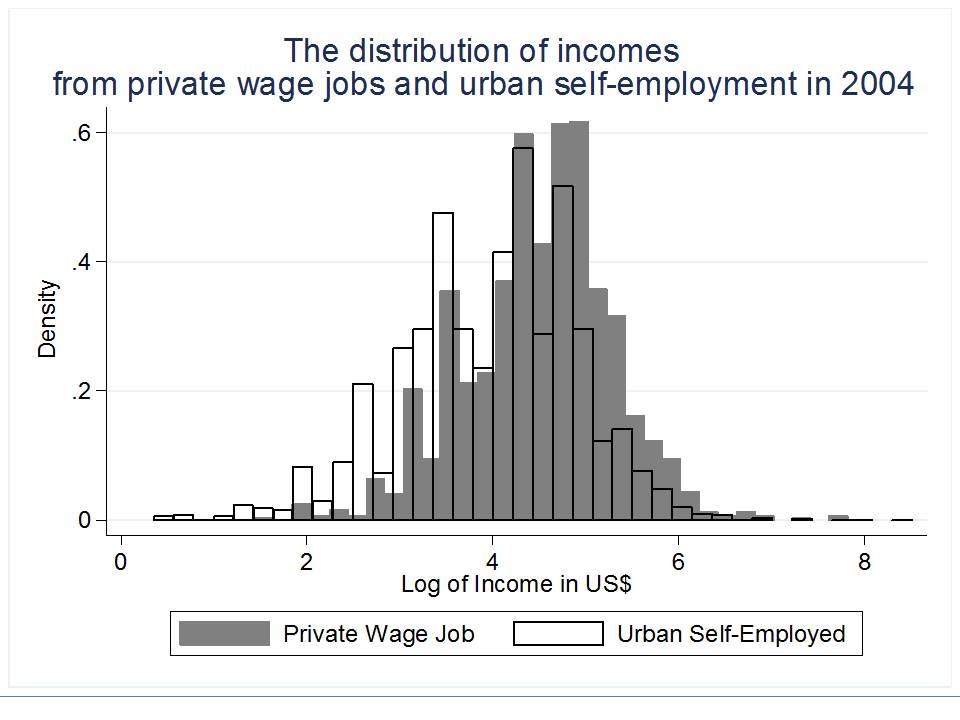 It is important to be clear the problem is incomes from jobs not the provision of more wage jobs. While private wage jobs do, on average, produce more income than those in self-employment a critical issue is the extent of the distribution of incomes within occupational categories and the overlaps across these sectors. For the urban sector the extent of the overlap between private wage and self-employment activities is shown in figure 1. It is the very low incomes we observe in Nigeria at the bottom of the distribution, for both wage and the self-employed, that accentuate the disconnect between increasing prosperity for Nigeria as a country and the lot of most of its population. For the young this disconnect can appear grotesque. In 2006, for those aged 15 to 25, less than 5 per cent had access to any wage job (that excludes those in full time education) and only 15 per cent had an urban self-employment income. Nearly 50 per cent were classified as either out of the labour force or unemployed. Failing so dramatically to supply income sources for so many, and the young in particular, does seem an excellent way of increasing your GDP and ensuring most do not notice.