Subjective Well-being and Social Evaluation in a Poor Country

China’s remarkable rate of economic growth since the start of economic reform is generally assumed to have raised the economic welfare of the Chinese people dramatically. This is regarded as self-evident from the facts that, in less than three decades, average real income per capita rose more than six times and that more than 300 million people were lifted out of ‘dollar a day’ poverty (Ravallion and Chen, 2007). Moreover, within a quarter of a century China’s ‘human development index’ rose from 0.37 to 0.68 (UNDP, 2010: table 2). For us to question whether economic growth has raised happiness in China appears either absurd or disingenuous.

Nevertheless, starting from the pioneering work of Easterlin (1974), economists have increasingly asked this question of advanced economies. It has been shown that, in several economies income per capita rose consistently over one or more decades and yet the mean subjective well-being score remained roughly constant. Very few studies have apparently been made for developing countries, probably owing to a lack of relevant time series data on subjective well-being.

Are these  findings for the advanced economies true also for China? Easterlin and Sawangfa (2010) provide evidence of the trend in reported life satisfaction or happiness in China from three sources: the Gallup survey, the Asiabarometer survey, and the World Values survey (table 1). In each case the average life satisfaction score fell over time. 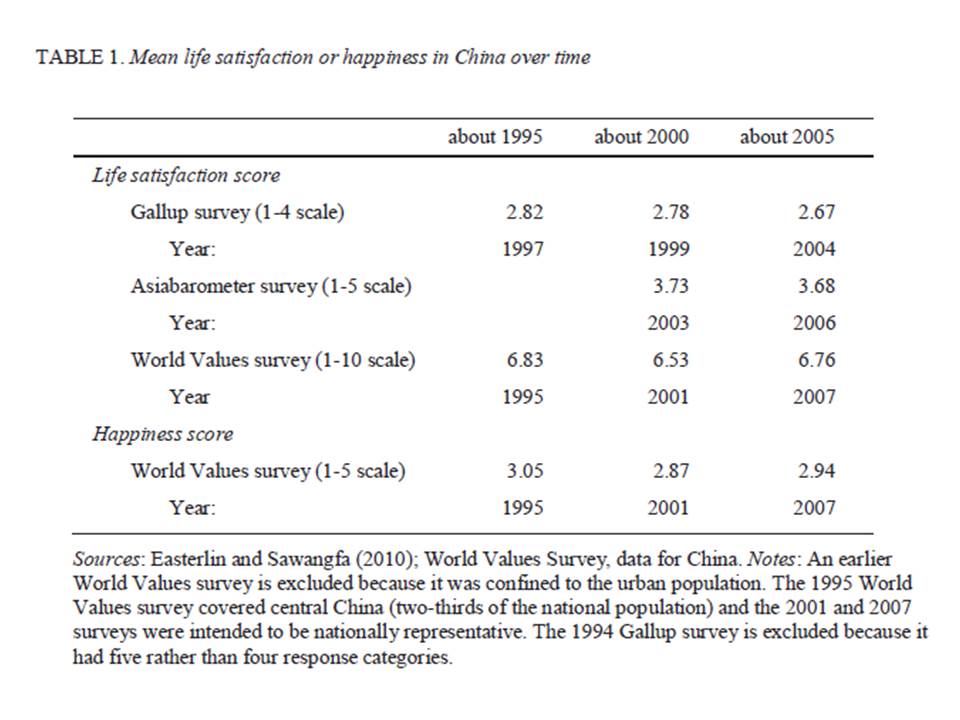 In our recent CSAE working paper , we present time series evidence confirming this observation. First, we find that current income has a positive and significant effect on happiness in all three Chinese subsamples considered – the rural, the urban, and the migrant. However, in none of these sub-samples is the coefficient on current income substantively large. Clearly, there are other, more important, determinants of individual subjective well-being.

Second, we find the higher the incomes to which people aspire, the lower is their subjective well-being. Aspirations are influenced by peoples’ reference groups and reference times. For rural people, the reference group is generally their fellow-villagers, for urban people it is their fellow-citizens within the city, and for rural-urban migrants, it is also other people living in the city, urban as well as rural hukou holders. It is not the income of ‘any old Zhou’ that produces feelings of relative deprivation but the income of the ‘Zhous you know’ – those who fall into a person’s reference group. China’s national Gini coefficient of household income per capita rose from 0.39 in 1988 to 0.47 in 2002 (Gustafsson et al., 2008: 19). It is likely that this rising income inequality reduced happiness, but the relationship is complicated by the importance of local reference groups and the possibility of demonstration effects as well as relative deprivation effects.

Third, aspirations for income are much influenced by reference time income, and this is governed mainly by the present. It is current income – both absolute and relative – that mainly determines aspirations for income. However, there appears also to be a ‘ratchet effect’: previous income can also influence aspirations, so that experience of a past fall in income reduces happiness, other things being equal. In general terms, the analysis highlights the important role that aspirations play in peoples’ perceptions of their own well-being.

Fourth, expectations of future income are important for current happiness. This suggests that a gloomier view of the economy’s prospects could be serious for well-being, and maybe even for political stability.

Using this framework of empirical findings, we can see that the changes in the economy and in the society that stem from, or go along with, economic growth are likely to have influenced overall happiness in China. They help to explain why the chapter of Easterlin et al. appearing in the same volume as this paper found that life satisfaction in China was no higher in 2010 than it had been in 1990. The effects of income growth itself are limited because of the resultant growth in aspirations, this being a function of both own and relative income. The importance of relative income for subjective well-being in all three sub-samples, together with rising income inequality over time, helps to explain the failure of happiness scores to rise with income levels. The new urban insecurities and uncertainties generated by economic reform and marketization have a negative impact on the subjective well-being of the growing number of urban residents. In particular, rural-urban migrants – rapidly expanding in number – suffer both from their second-class status in the cities and from the widening of their reference groups to include the more affluent urban-hukou population. By extending the reference groups of rural-dwellers beyond the village, migration can also have the effect of reducing rural happiness.

Our analysis of the relationship between economic growth and happiness in China is only a beginning. Progress – in China as in many other countries – awaits a ‘second generation’ of household panels which contain modules on subjective well-being designed with research questions in mind. A start could have been made in the CHIP household survey of 2007, which was the first year of an annual panel. However, their political sensitivity required that questions on happiness be excluded from the surveys of rural and of urban resident households – the implementation of which required the cooperation of the National Bureau of Statistics.

Our analysis raises, and also illuminates, some basic normative and policy issues. To what extent should subjective well-being enter into the social welfare function, and be accepted as one of the criteria for policy making? There is no right answer: ultimately, a value judgement is required. Our discussion was an attempt to set out the case for and against making this, and alternative, value judgements.

The alternative capabilities approach to social evaluation discards the use of subjective well-being on account of the adaptation of the deprived to their deprivation. Instead it includes in the social welfare function the achievement of certain capabilities to function, that is, to be and to do things of intrinsic worth. However, this approach is also open to criticism, requiring as it does an externally imposed valuation of the various capabilities, not based on clear criteria for selection or aggregation.

We made an attempt to present subjective well-being as an encompassing concept by including income, physical functionings and social functionings as inputs in the happiness equation. The estimated coefficients of the equation can be viewed as the weights that people attach to the contributions that these inputs make to their welfare, averaged over society as a whole. This approach is also open to criticism: the subjective values that people on average attach to the variables in the equation may not be an acceptable reflection of their social values, either because aspirations and adaptation are not tethered or because the social value is not well measured by the effect on happiness.

Powerful and plausible regularities were observed in the positive analysis. Thus, in making the necessary value judgement, it is difficult simply to dismiss as irrelevant peoples’ reported perceptions of their own welfare. Our own position is that, provided it is guided by knowledge of the determinants of subjective well-being, there can be a case for including subjective well-being in the social welfare function, but also for including other criteria as well, such as concern for individual freedoms and social fairness. Subjective well-being can be appropriate not only for judging social progress but also for making policy choices.

It is government which effectively makes the value judgements about the implicit social welfare function that guides policy. There are some difficult policy trade-offs between the gains from economic growth in China, and the losses from the socioeconomic changes accompanying growth, and these have not always been sufficiently recognised. For over a quarter of a century China’s reformist policy-makers gave the highest priority to the achievement of rapid economic growth. In the last few years, however, the balance of policy objectives has moved somewhat in the direction of creating a ‘Harmonious Society’, for instance, showing greater concern for reducing income inequality and for improving social security. That move can be seen as a response to the issues that underlie this paper. Whether it is because of their threat to social stability and thus to continued Communist Party rule or for other reasons, the forces that influence subjective well-being appear to have entered the government’s social welfare function.

[1] The paper will appear in a chapter of Andrew Clark and Claudia Senik (eds), Happiness and Economics. Lessons from Developing Countries, OUP (in press)