The Future in Mind: Aspirations and Forward-Looking Behaviour in Rural Ethiopia

A person’s aspirations, or goals and targets for their future, can be a driving force in their life, providing motivation and guiding their choices. In forming aspirations, all people dismiss some options for their future lives, and fail to even imagine other options or opportunities. Once formed, aspirations can limit the possible futures we consider by focusing our attention on some future options and filtering out others.

Poor people who have faced the ongoing struggles of living in poverty may struggle to believe that a better life is possible. Their aspirations may reflect beliefs that their future opportunities are limited, that there is limited potential for a change in their circumstances, or that they have limited capabilities to change their lives. As a result, they may be unwilling to invest in certain opportunities.

Role models could help change all that. A new paper, co-authored by Tanguy Bernard (IFPRI/University of Bordeaux), Stefan Dercon (University of Oxford), Kate Orkin (University of Cambridge) and Alemayehu Seyoum Taffesse (IFPRI), suggests that when people see inspiring examples of other people changing their lives, they may revise their aspirations and alter their choices regarding investments, savings, and even education for their children.

In a randomized field experiment conducted in 64 rural Ethiopian villages in 2010 and 2011, poor participants were shown short documentaries in which people of similar socio-economic backgrounds tell personal stories about how they were able to change their circumstances and better their lives. Importantly, the documentaries emphasize hard work, goal-setting, and careful decision-making – none of the people interviewed in the documentaries became extremely successful, but all moved out of poverty without the help of government programs or NGOs. The documentaries and an example of a placebo are available here.

The experiment found that these documentaries had increased participants’ aspirations six months after viewing the one-hour documentary. Participants who were invited to a documentary screening were compared to both a control and a “placebo” group shown short comedy sketches. Here we focus on comparisons between the treatment and control group.

The bars on the graph below show the effect on outcomes of being invited to the documentary, compared to the control group. The black lines are 90 per cent confidence intervals for the effect. If the ends of the black lines are always above zero, we conclude that there is a statistically significant difference between the control group and the group who saw the documentary. 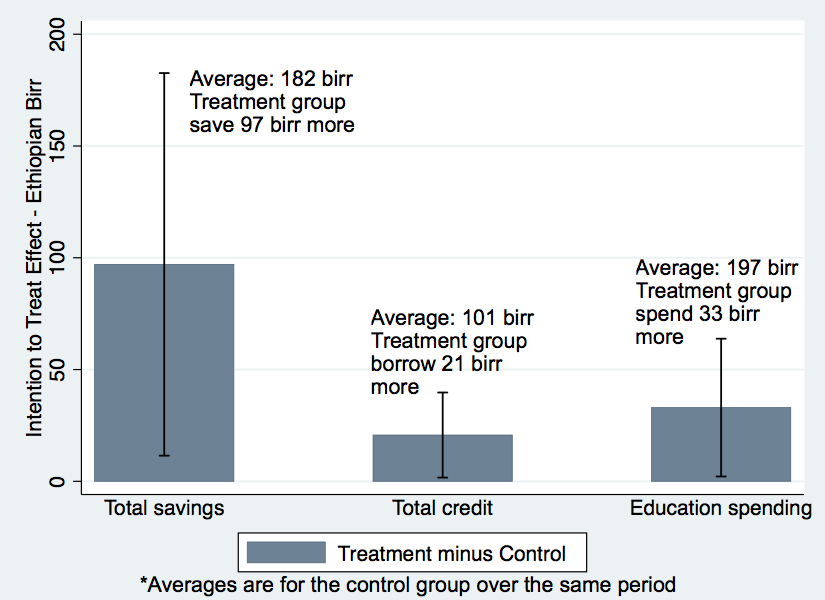 Varying the number of individuals exposed to documentaries across villages, the authors also find evidence of peer effects, with the  number of a person’s friends invited to the documentary further contributing to his/her decision to further invest in children education.

The authors also show that the documentaries altered psychological measures of people’s perception of whether they are able to shape their lives and future. The intervention increased the extent to which people think their life’s outcome depends on their own actions and choices and decreases the extent to which they see poverty as a condition determined by fate. Psychologists have shown that these measures are correlated with individuals setting higher aspirations, so these results provide further support for the aspirations results in the paper. The authors also show that the documentaries did not alter people’s preferences in relation to risk, nor the extent to which they discount the future, ruling out some of the other possible explanations for the change.

All the results were measured six months after the one-hour documentary screenings occurred. The randomized experimental design ensures that any changes in behavior could only be due to the intervention, not to any other changes. The nature and extent of responses in the treatment group are surprising and make a strong case for further research on the psychological effects of poverty and on the role interventions to reduce these effects may play in reducing poverty.

The research paper is available here.
The paper has also been discussed on the Development Impact blog, here.
Documentaries and one of the placebo videos used in the RCT are here.

This research was funded by the United Kingdom Department for International Development (DFID) as part of the Institutions for Pro- Poor Growth Consortium (iiG), a research programme to study how to improve institutions for pro-poor growth in Africa and South-Asia. Production of the documentaries used in the randomized controlled trial was funded by SEVEN (Social Equity Venture Fund) through the Open Enterprise Solutions to Poverty competition. Bernard and Taffesse acknowledge the support of the International Food Policy Research Institute (IFPRI) Development Strategy and Governance and Markets, Trade and Institutions divisions. The views expressed are not necessarily those of the funders.