The future of donor agencies in Africa: an open and honest debate

The final plenary at this year’s CSAE conference asked about ‘The future of donor agencies in Africa, and was chaired by Stefan Dercon (CSAE director, University of Oxford). The participants were Lindy Cameron (Director General, DFID), Albert Engel (Internal Director of the Africa Department, GIZ), and Matthew Spencer (Campaigns, Policy and Influencing Director, Oxfam). Marc Witte, DPhil student at the Department of Economics and CSAE, reflects on this very lively debate.

Overall, this was a very engaging and honest debate that saw ample audience participation and sketched different scenarios for the future deliveries of development aid. Without revealing too much, it comes at no surprise that all speakers agreed that aid agencies would still be needed in the future, in particular in the light of new conflicts, crises, and fragilities in the developing world.

Professor Dercon introduced the topic of the plenary by mentioning a rapidly changing world, including Africa, and the new uncertainties through fluctuations of prices and conflicts that come with such changes. What do global trends and developments mean for the traditional donor agencies in Africa? He invited the three guest speakers to reflect on the legitimacy and work of their organisations in the next 20 years.

Lindy Cameron (UK Department for International Development) started by connecting the creation of DfID as a largely grant-based, technical assistance-focused agency in a stable post-colonial cold-war environment to DfID’s recent focus on fragile, conflict-impacted states. Given the encouraging macro trends in Asia, she projected that DfID’s medium run focus will be on Africa, in particular African fragile states.

Stressing that every agency has to ask itself what from the past decades’ toolkit is still useful today, Lindy hopes that DfID’s future engagement will be less in the spheres of basic assistance and more in the area of strategic-level engagement and private sector support, where often money could be spent better and with more leverage.

Albert Engel (GIZ) outlined his personal career from a bottom-up and technical “helping the poor” approach in the early eighties with little or no attention to national strategies over the bilateral agreements and sector strategy packages of the nineties to today’s institution and capacity building as well as close collaboration with multinational corporations. In comparison, his personal experience at GIZ seems very similar to DfID’s “maturation process”, with the agencies’ role shifting from implementer to advisor, catalyst or even matchmaker between government and private sector.

He predicts four major trends for donor agencies that will dominate their work in the next 20 years:

In the last introductory statement, Matthew Spencer (Oxfam) drew a more pessimistic picture of the current state of world development, stressing that he is not very optimistic the international community will reach the sustainable development goals (SDGs) by 2030. In his view, this is mainly due to three reasons, which will shape the policy agenda for the next 20 years.

First, introducing Oxfam’s (in)famous statistic of the eight richest men owning as much as the bottom 50% of the world population, Matthew stressed that the growth of global inequality is slowing poverty reduction, with large increases in relative and absolute poverty in middle-income countries like Nigeria. Despite more positive examples such as Ethiopia or Rwanda, many countries have been “getting growth wrong”, leading to massive increases in inequality.

Second, Matthew mentioned tax dodging as another reason why the SDG’s will fail, with Africa losing £38 billion every year through corporate tax dodging and tax exemptions for the oil and gas industry.

Third, agreeing with the previous speakers, he cites conflicts and climate change (as conflict-amplifier) as further impediments to fair and sustainable development. In a more optimistic spin, he envisaged aid to be a much smaller component of the budget of African countries in medium run, while tax revenue and private equity would go up.

In his view, the big role of development in the next 20 years is threefold: 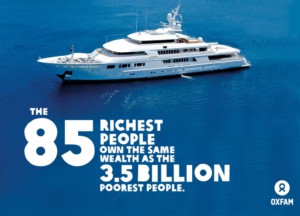 Contributions from the audience

After these personal and partly career-inspired reflections about the future of aid and donor agencies in Africa, the plenary discussion was opened for audience questions. Given the topic and the fact that this was CSAE 2017’s final plenary, there were a lot of questions, in fact too many to cover them all in this blog entry – so I am selectively illustrating a few.

Karan Nagpal, a CSAE DPhil student, asked about the role of infrastructure in the donors’ portfolio, drawing on his personal experience as an ODI fellow working with Vanuatu’s government. Lindy Cameron replied that infrastructure projects had become more important recently for DFID, where “infrastructure” should be seen holistically (and not in a purely tangible sense). Albert Engel (GIZ) concurred, stressing that infrastructure and capacity building often go hand in hand (countries needed “streets and engineers”). He conceded that in recent years there had been too little emphasis on infrastructure development, with most large infrastructure projects driven by the development banks instead of donor agencies. In his view, Chinese development aid has a comparative advantage in infrastructure delivery, which should be combined with Western governments strengths in sustainability, ideally within triangular agreements including the recipient country.

Next, Moritz Poll, an Oxford MPhil Economics student, asked where cooperation between countries would stop and if there were any “red lines” that aid receiving governments cannot cross, citing two examples from Lebanon and South Sudan. Acknowledging the importance and complexity of this question, Lindy Cameron quickly noted that almost every government DFID worked with poses challenges of some sort – after all, they represent some of the poorest and fragile countries on the planet. Since many of these countries are not entirely aid-dependent, and in order to avoid recurrence into old “colonial-style” blackmailing, most country donor agencies tried to set the incentives correctly rather than threatening to withdraw aid completely. After all, this would most often only hurt the poorest of the poor. Referring to Moritz’ example cases of Lebanon’s policy of not calling Syrian refugees “refugees” anymore and South Sudan’s recent practise of charging Muslims immensely higher immigration fees, she stated that while DFID does not have a pass-fail way of characterizing country relationships, the examples brought up were very different in nature – with Lebanon essentially bearing more than his weight in alleviating the Syrian refugee crisis and the situation in South Sudan is not good for anyone.

Finally, Oxfam’s “flagship” statistic on the eight richest men in the world owning as much as the bottom 50% of humanity caused a lot of heated discussion.

As remarked by CSAE’s deputy director Simon Quinn, the prominent Oxfam statistic is based on net assets, which leads to counterintuitive positioning of individuals in the poverty distribution (Simon gave the example of an African child with a few cents in her pocket being placed higher than an Economics PhD graduate with ten thousand pounds of student debt).

Matthew Spencer’s reply stressed that their calculation method did not matter that much, whereas the underlying trend was important: Inequality to the extent that we can observe today is “a cancer in society, which undermines most of the good things we want” (such as democracy, access to health and education, etc.). The discussion was far from over though: Simon agreed that in fact almost all researchers would share the idea that current levels of inequality are far too high. However, he expressed his disappointment at an aid agency creating headlines at the cost of a constructive debate and engagement with the academic community, using potentially misleading statistics in the times of “fake news”.

As Stefan Dercon in his final statement concurred with Simon on this strongly debated issue, the panel did in fact end with the conciliatory suggestion to “agree to disagree” on this point, and participants could be seen engaged in discussion even after the microphones had been switched off.

In my personal view, this open and frank exchange was one of the highlights of the plenary, and showed that there is a dire need for discussion between the research community and practitioners – certainly in this particular case of communicating numbers and statistics to the public which by their very nature are not set in stone or limited to one single number.

Marc Witte is a DPhil student in Economics at the Department of Economics and CSAE.