How useful is education in Africa?

Travelling around any poor country in sub-Saharan Africa (SSA) the visitor is struck by how far schools outnumber factories. The large number of schools is due partly to the success of one of the MDGs which is that primary education should be available to all children. According to World Bank data the primary completion rate for boys in SSA increased from 58 to 73 percent between 1999 and 2012 and for girls from 48 to 66 per cent. But why all these schools and no factories? Isn’t the idea that education should enable the newly educated young to have better jobs and aren’t those better jobs likely to be in factories?

That this schooling is useful is virtually unquestioned in discussions of development policy. True there will be concern at the quality of the education, at the fact that much of this education is not free and that girls do not have equal access to the education. But surely its usefulness is self-evident?

In this blog I want to argue that its value in enabling the newly educated to earn more is far from self-evident. The inference, rather obviously, is not that the young should not be educated. The inference is that we need to understand what does make education useful for increasing earnings. (I am not arguing that this is the only, or indeed the most important, function of primary education, it is just the one I wish to focus on). While, rather out of character, all economists would agree that education and earnings are highly correlated beyond that they revert to normal and agree on very little. The question we need an answer to, and it turns out to be a very hard question to answer, is how does education at different levels affect earning opportunities?

Figure 1 below shows why we care a lot about the earnings gain at different levels of education in SSA. The extent of the investment in primary education has dramatically changed the skill composition of Africa’s population. In 1960 some 90 per cent of Africa’s adult population had no education meaning that they had failed to complete primary level. By 2010 this proportion had roughly halved and similar proportions, 40 per cent, had no education as had primary. The implication is rather stark – the vast majority of the increase in education that has been achieved has been at the primary level. Unless education at this level increases earnings then the very large increases in education that have been achieved will not have increased earnings. 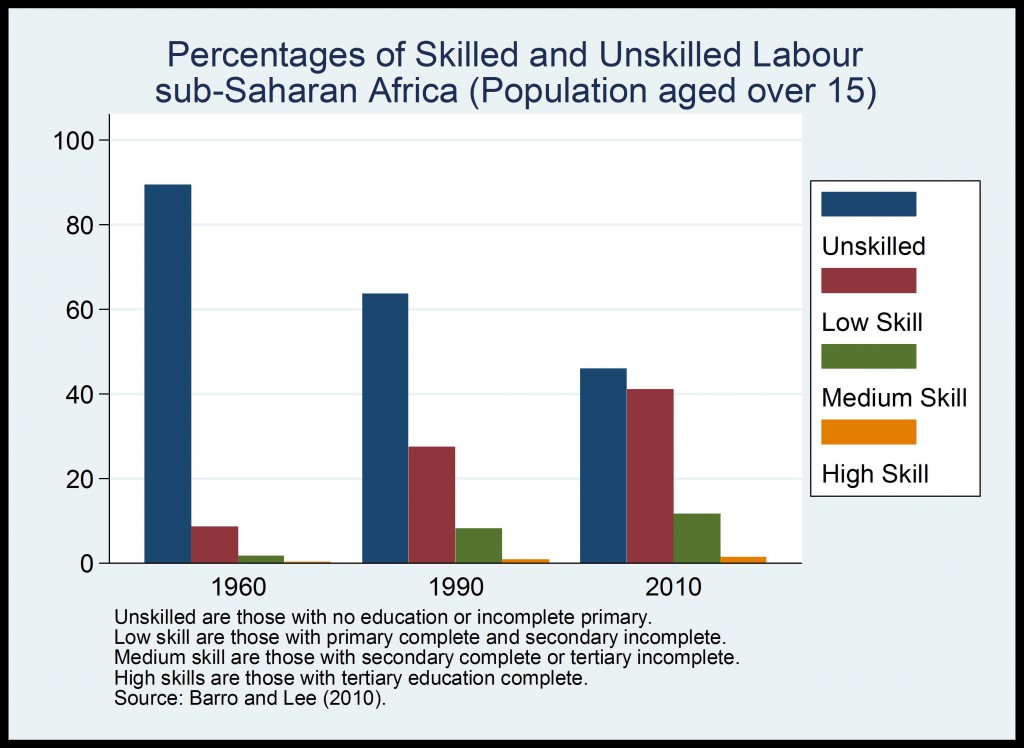 So how does primary education affect earnings? There is no agreement as to the answer to that question. There is a long history in this area of arguing that primary education is the most valuable aspect of education in the sense that the earnings increase at that level is highest. That is the argument advanced by George Psacharopoulos and his collaborators. Where this view has been confronted with actual earnings, usually wages, the result has been rather different. Figure 2 shows the pattern across four sub-Saharan African countries where it appears low levels of education have negligible returns. The figure does not show that education at the primary level did not raise earnings. It may be the case that it did but something else, we do not know what, reduced it so the net effect was zero. While such charts do not tell us about causes they do tell us about outcomes and for the primary educated the outcomes appears a rather unhappy one.

In a recent working paper drawing on the DPhil work of Rulof Burger (WPS/2014-10) a different approach is taken to this question. This uses industrial sectoral data for South Africa to link education, not to earnings, but to labour productivity. The findings here are radically different from the shape showing how earnings and education are linked. In this study low levels of education have by far the highest returns. This result is of interest partly because it is, as far as I know, the first to find such an effect and partly because the data enables a range of tests which suggest the result is fairly robust. Why then the difference between this result and the convex function shown in Figure 2? 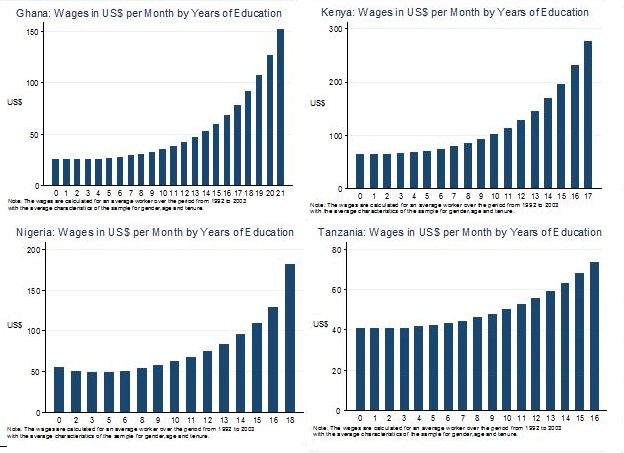 We do not know but I would like to suggest one possibility. This is that the data is from South Africa which differs from the rest of SSA in that most employment is wage employment in firms. It is true that there are not nearly enough such jobs in South Africa but that is a different issue. The employment structure is very different from the rest of SSA. Is it the case that education to be useful in increasing earnings needs to be linked to the kind of jobs and if those jobs are there then education is indeed far more valuable? Such an interpretation is speculative. When earnings are regressed on education the shape of the function for South Africa is very similar to that shown in Figure 2. Why such different patterns emerge as to how education impacts on earnings from how it impacts on productivity is a puzzle.

If the high return to primary education found in South Africa’s sectoral data is due to its industrial structure then the picture with which we began of many schools and very few factories is indeed a problem. Without the factories the dramatic increase in the primary educated work force will indeed see little economic gain from their education. The recent increases in the demand for education beyond the primary level certainly suggests that both students, and their parents, are aware that low levels of education have little value in the job market place. Focusing on meeting that demand rather than focusing on why that demand has arisen may well be to miss the critical problem facing educational policy in Africa.

The sources for the data used in Figure 2 can be found at:http://www.csae.ox.ac.uk/datasets/main.htm. A statement of Geoge Psacharopoulos’ arguments can be found at: Psacharopoulos, G. and Patrinos, H. A. (2004) “Returns to investment in education: a further update”, Education Economics, Vol. 12, No. 2, August.

This entry was posted in Jobs, Finance and Skills and tagged Development, Education, Employment, Firms, Jobs, Labour. Bookmark the permalink.

One Response to How useful is education in Africa?