The height production function from birth to maturity

Starting in the 1970s, anthropometric measures have increasingly been used in the social sciences as indicators of social well-being. Since then, adult height has been considered an indicator of the general health status in life, of the relative risk of survival, and labor productivity (Fogel, 1986). In particular, Case and Paxson (2008) explain the positive correlation between adult height and labor productivity by showing that height is positively associated with cognitive ability. They show that both cognition and height are driven by early childhood investments and therefore cognitive achievements are correlated with height, and wages are affected by cognitive skills. Poor health can explain both low height and low labor productivity. This is more evident in developing countries where living conditions are poor. However, adult height is just the final result of a process of growth that involves many different mechanisms and variables, and most of the common evidence looks at adult height (Steckel, 2009). It is therefore necessary to investigate the factors driving height, since understanding the determinants of height is important in order to understand health (Deaton, 2007). The determinants of height can be divided into non-genetic factors, genetic factors and the age when height is measured. The principal non- genetic factor is net nutrition which is the difference between food intake and the losses to activities and to diseases (Eveleth and Tanner, 1991).

To study the determinants of height from birth to maturity I use in my last CSAE working paper the Cebu Longitudinal Health and Nutrition Survey (CLHNS), which is a rich longitudinal survey of a cohort of Filipino children followed from conception, in 1983-84, to 2005. The distribution of height by age and sex is shown in Figure 1. 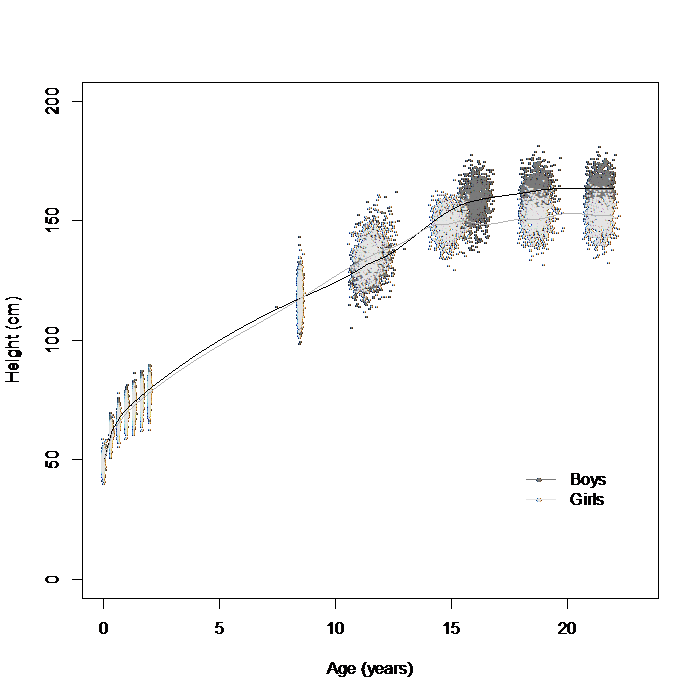 The nutrition inputs considered are the caloric intake and breast feeding. I distinguish between diseases experienced during infancy, pre-puberty and puberty because they are age-dependent and might have a different impact on a person’s growth, and moreover the data contain different measures of morbidity that differ between waves. In particular, I consider diarrhea episodes experienced during infancy, length of stay in the hospital during pre-puberty, and hospitalization during puberty (dummy if the child has been hospitalized).

In order to estimate this model, I consider a within-child fixed effects specification (FE) where I estimate the change in height between two consecutive measurements, remaining only with the contemporaneous inputs. However, contemporaneous inputs could respond to previous shocks causing endogeneity because correlated to unobserved parental preferences regarding their children’s nutrition and preventative care. I address endogeneity of both nutrition and diseases by using variation in village-level food prices, village and household characteristics, and climatic shocks as instrumental variables (IV) to estimate the production parameters via IVFE.

Overall, these results show that growth in infancy and in the pre-puberty years turn out to be critical stages in the process of height formation. This is in line with the increasing literature on the long term effects of early life conditions (Almond and Currie, 2011) and with new studies that reveal the importance of later critical periods (van den Berg et al., 2014). Most importantly the paper shows that some critical periods are important because diseases experienced during infancy play a major role compared to nutritional intake. This might be important to design policy interventions that target individuals in these critical periods to improve their health and potentially their socio-economic outcomes later in life.

This entry was posted in Uncategorized and tagged Development, Health, height, Poverty. Bookmark the permalink.

One Response to The height production function from birth to maturity