The third plenary, and final session, of the CSAE Conference 2015 featured three presentations on different aspects of migration, and its relationship with the broader theme of economic development.

Michael Clemens of the Centre for Global Development started with a presentation that questioned the standard narrative of skilled migration leading to adverse consequences for the origin country of the migrants. Much of the existing research assumes that skilled migration leads to a fall in the human capital of the home country, but recently collected data provides little evidence to support this claim (see figure). 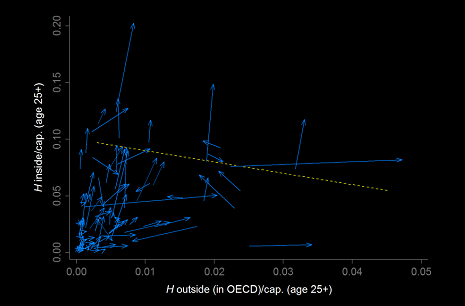 Figure – The yellow line is the predicted relationship between human capital within the country (y axis) and the extent of skilled migration or human capital outside the country (x axis), based on the assumption that one skilled migrant from a country leads to a proportional decline in the number of skilled workers available within the country. The blue arrows show movements of individual countries between 1990 and 2000, which suggests that few countries have followed the predicted pattern.

Clemens suggested a number of fruitful areas for future economic research that extends the standard production function by identifying alternative channels through which migration affects development. His own research based on a natural experiment in Fiji indicates that anticipated participation in the global labour market could lead to an increase in the demand for tertiary education and a higher accumulation of skills at home. Other channels through which skilled migrants can promote economic development is the transfer of technology and capital back to their home countries, the facilitation of increased trade between home and destination countries, and, interestingly, the promotion of certain institutions, such as democracy and freedom of expression. Finally, one the most important questions of the development research agenda – what Clemens terms the ‘’biggest game’’ – is the identification of human capital externalities, which are yet to be empirically documented. If human capital externalities are limited, then the effect of skilled migration on both home and destination countries might be much lower than previously predicted.

International cross-border migration may be the most visible form of migration, but in terms of numbers it is dominated by internal migration within the borders of a country. Melanie Morten of Stanford University presented a number of stylized facts on internal migration based on data from 18 censuses in sub-Saharan African countries. First, migration rates are high: as much as 30% of the population migrates from its region of birth, on average. Second, while households in the agricultural sector are less likely to migrate than not, a significant number – around 40% on average – do choose to migrate. Third, migrants are able to find employment, at least at the same rates as the non-migrant population. The only exception is South Africa where migrants are much more likely to be employed than non-migrants. Fourth, and most strikingly, in spite of high migration rates, large wage gaps continue to persist across regions.

Understanding why, in the presence of large wage gaps, people do not migrate from low-wage to high-wage areas is critical to determine a suitable policy response to migration. Researchers have not been able to explain the entire wage gap by differences in the skills and preferences of migrants. The explanation most favoured by Morten is that the wage gap reflects the high costs associated with migration, possibly due to the lack of adequate infrastructure. If we believe that there are gains to migration, and that high transport costs may be constraining migration, then the return to building better roads, for example, would be higher than previously estimated. Exploring these implications of migration on policy, says Morten, is an exciting area for future research.

Clement Imbert of the University of Oxford made the final presentation on seasonal migration. Drawing on his own research in India, he drew a profile of the typical migrant who travels in search of employment in response to the low incomes of the agricultural lean season. Most migrants are male, poor, and small landowners from remote, rural areas, who migrate to well-connected, urban centres. They usually travel by rail and are able to cover large distances of 300-400 kilometres on average due to the low marginal costs of travel by train. They typically work in construction and small-scale manufacturing, and may be recruited at their destination or from their home villages.

Imbert examines the effect of the world’s largest workforce programme on seasonal migration. The National Rural Employment Guarantee Scheme (NREGS) provides employment to workers living in rural areas during the agricultural lean season. Imbert and Papp (2015) find that the scheme crowds out seasonal migration; in fact, workers are willing to stay at home for a relatively modest increase in household income (Rs 60 earned per day under NREGA against the Rs 120 they could earn if they migrated to cities). One reason for this wage gap, according to Imbert, is the perceived risk associated with finding work in urban areas; another could be the very poor and often dangerous living and working conditions encountered by migrants in the cities. The other effect of the NREGS is a rise in wages in urban centres in response to a fall in the supply of migrant workers, leading to higher labour costs for sectors that are heavily dependent on migrant labour. Government policies can, therefore, play an important role in shaping the extent and form of seasonal migration; space-based policies could reduce seasonal migration, while policies targeted at reducing travel costs could encourage migration.

Getting the words right

A lively discussion followed the presentations and perhaps the most thought-provoking insights related to the impact of language on research and policy. In particular, as Clemens emphasised, the use of normative and even pejorative language to describe migrants – such as the popular phrase, “the brain drain” – preempts a conclusion to the analysis of the effects of migration. Imbert, too, pointed out that the description of seasonal migration as “distress migration” might even lead government to formulate counterproductive policies. One hopes that researchers and policymakers follow the lead of our presenters; however, on a subject as politically motivated and emotionally charged as migration, this may well be easier said than done.

This entry was posted in Uncategorized and tagged CSAE2015, Development, Employment, Migration. Bookmark the permalink.

One Response to Migration and labour mobility